Paul Rudd returns in one of the least serious Marvel entries. 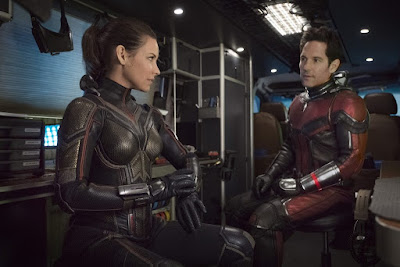 Ant-Man and the Wasp, the latest movie to spring from the Marvel Universe, falls short in many ways: It has a jangled plot, a trip into a strange Quantum Realm in which characters and creatures float as if immersed in Jello and stretches of talk in which the dialogue isn't likely to evoke comparisons with Shakespeare.

Fortunately, that's not the whole story. This second, big-screen helping of Ant-Man also benefits from what might be deemed a thoroughgoing and entirely welcome lack of cosmic ambition.

Thanks go to Rudd's genial reprise of his role as Scott Land (a.k.a. Ant-Man), enough humor to carry us through the movie's doldrums and a collection of characters who must act as if there's much at stake -- even if there isn't.

Director Peyton Reed, who directed the first installment, also plays fun games with scale as Ant-Man makes the shift from tiny creature to parade-float size. Ant-Man can become as small as ... well ... an ant or as big as a zeppelin, opening the door for Reed and his cohorts to play lots of clever games involving mutable size.

Stretches devoted to exposition may keep the movie from soaring, but it's difficult to resist car chases in which full-sized cars suddenly shrink to Hot Wheels proportions or an action scene in which a PEZ dispenser enlarges to play a significant role.

So what happens? Well, Dr. Hank Pym (Michael Douglas) and his daughter Hope (Evangeline Lilly) believe they can rescue Hope's long-lost mother (Michelle Pfeiffer) from the Quantum Realm, the zone where she disappeared while executing a selfless act of heroism. Pfeiffer, who isn’t around all that much, does double duty as Pym's long lost love.

Hope also is the Wasp, which means that she has been given wings to flutter and the responsibility of broadening the movie's gender appeal.

Additions to the series include the Ghost (Hanna John-Kamen), a woman who's on the verge of decomposing and who (understandably) would rather remain in one piece. Laurence Fishburne turns up as one of Pym's estranged colleagues, another researcher into the Quantum Realm. Walter Goggins plays a greedy businessman who also has his eye on the Quantum Realm.

Randall Park appears as an FBI agent whose interchanges with Scott provide the movie with a comic motif that it's not afraid to repeat, but which proves amusing enough not to wear out its welcome. Scott, by the way, is being monitored by the FBI because he's been under house arrest for two years. His time of confinement is almost up, but you can bet that he'll find a way to weasel out of his ankle bracelet and join the action before he's officially set free.

Michael Pena turns up as the fast-talking operator of a security company. A veteran of the first installment, Pena makes no attempt to do more than add laughs with his character's frenetic speech. Pena's Luis once shared a cell with Lang, a thief before his elevation to superhero status.

Look, there's little point rattling on about a movie such as Ant-Man and the Wasp. If you see it, you'll find enough humor to stave off a case of Marvel overdose -- and some of that humor has a visual kick, something rare in today's comedies and, therefore, something to savor.

(An aside: Gore Verbinski -- director of several Pirates of the Caribbean movies remains the undisputed master of visually inventive comedy.)

But as far as this edition of Ant-Man is concerned: It's nice to see a Marvel movie that seems intended to amuse us more than it's designed to beat us into submission.