A private detective with Tourette syndrome

Edward Norton directs and stars in Motherless Brooklyn, a movie that never attains the impact that seems to have been intended. 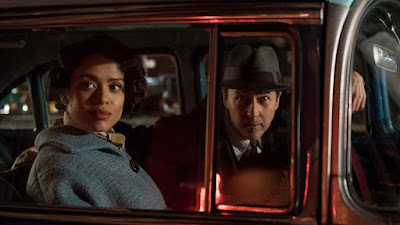 There’s nothing inherently wrong with long movies. Problems arise, though, when the content and momentum of a particular movie don't match its length. And that’s what happens with Edward Norton’s two-hour and 20-minute adaptation of Jonathan Lethem’s 1999 novel, Motherless Brooklyn.

In adapting Letham’s novel for the screen, Norton (who wrote the screenplay, directed and stars in the movie) uses Lethem’s story about a detective with Tourette syndrome as a launchpad for a conspiratorial tale about the ways in which a powerful figure built the bridges and highways that shaped New York City, destroying neighborhoods in the bargain.

It doesn’t take too much imagination to understand that the movie, set during the 1950s, can be taken as a riff on the career of New York power broker Robert Moses -- and perhaps on all wheeler/dealers who accumulate power without applying any ethical constraints.

A complicated story weaves through the various scenes that push Norton’s character deeper into the dens of power. He’s trying to negotiate his way through a labyrinth he doesn’t fully understand and which, frankly, may baffle audiences, as well — at least in the early going.

Moviegoers with memories probably won’t be able to resist comparisons to Chinatown (1974). But that movie became a classic of contemporary noir. Motherless Brooklyn, I’m afraid, is a wannabe by comparison. I’m talking about the movie's characters, its mood and the lack of chemistry between Norton and the movie’s female lead, portrayed by Gu Gu Mbatha Raw.

No point dwelling on the plot, but a word or two about the secondary characters. Bruce Willis appears briefly as the mentor and employer of Norton's Lionel Essrog. Willis' Frank Minna, a private eye with his own agency, rescued Lionel from an orphanage and schooled him in the ways of the street.

Bobby Cannavale portrays the slickest member of Frank's detective agency. Alec Baldwin appears as Moses Randolph, the movie's power broker, a man who doesn't care how many lives he wrecks. Baldwin is fine, although, in crucial moments, his dialogue is too on-the-nose. Willem Dafoe delivers an angry, agonized performance as a compromised idealist.

Safe to say that none of these characters is all that memorable. The same goes for a community organizer (Cherry Jones), a woman who’s fighting for New York’s neighborhoods. Raw’s character is part of that team, an activist lawyer intent on fighting the powers-that-be.

Michael Kenneth Williams portrays a jazz trumpet player who plies his trade at a Harlem nightclub that figures in the movie’s plot. Always commanding, Williams appears at a moment when Norton allows the narrative to stall; it almost seems as if he values listening to the music on the soundtrack more than moving the plot.

Norton gives Lionel the tics and outbursts that define his brand of Tourette syndrome. In displays of uncontrollable agitation, Lionel tries to put sometimes unrelated things together, which may be a metaphor for how he's trying to deal with a broken society. But Motherless Brooklyn isn't really about a man living with Tourette syndrome; it's a plunge into a corrupted world and the movie eventually staggers under the weight of what appear to be ultra-serious aspirations.

A fine cast keeps Motherless Brooklyn watchable, but something odd happened when Norton changed the time period of Lethem's novel from the 1990s to the 1950s. It lost much of its urgency. Motherless Brooklyn ca be so retro, it feels as tired as some of the clothes you might find in a thrift store, almost worn out -- and maybe a trifle passe.