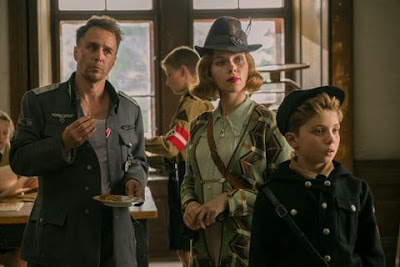 The first mistake you can make about JoJo Rabbit is to think that the movie has anything much to do with the Holocaust. Yes, it takes place in Germany during World War II and, yes, it involves a single mother who hides a Jewish teenager in her attic, and, yes, it shows that even a charming kid can fall prey to the toxins of anti-semitism.

But director Taika Waititi’s comedy takes place in a fantasy zone where anti-semitism has been divorced from mass murder. The movie mostly deals with Germans -- either decent or comical or a mixture of both. That makes JoJo tolerable while at the same time rendering it largely inoffensive, something no satire can afford to be.

This is not to say that Waititi doesn't know what he's doing. His track record (What We Do in the Shadows, Hunt for the Wilderpeople and Thor: Ragnarok) is good and within JoJo Rabbit, you'll find plenty of cinematic invention.

By now, you probably know the set-up. JoJo (Roman Griffin Davis) is a 10-year-old fledgling member of the Hitler Youth who has created a doozy of an imaginary best friend for himself, Adolf Hitler, played by Waititi. The boy’s free-spirited mother (Scarlett Johansson) clearly loves her son and evinces a blithe approach to life that’s a bit out-of-synch with her moment; i.e., the looming defeat of Germany in the end days of the war.

Moreover, Johansson's character's fashion flair stands in sharp contrast to the depleted German civic environment that accompanied the end of the war.

Waititi takes a fractured approach to what seems less an attempt to encompass comedy and horror than an attempt to build a fantasy world in which Nazis are comical and, in which, love ultimately conquers hate.

To that end, Sam Rockwell plays Captain Klenzendorf, a Hitler Youth leader with a blasé attitude toward Nazi imperatives. He has an uber-blonde assistant played by Rebel Wilson, who might as well be wearing a sign that reads, "Hateful Nazi."

Mel Brooks’ Nazi caricatures in The Producers became risible assaults on the very notion that anyone could take the staunch idiocy of Nazism seriously. Of course, millions did, so Brooks was also delivering an act of Jewish revenge that was far more effective than what Quentin Tarantino tried to accomplish at the end of Inglourious Basterds, a movie that boldly congratulated itself for presenting the face of “Jewish revenge.”

Waititi includes many comic bits, a disastrous weekend outing for JoJo when he joins the Hitler Youth, a sight gag involving German shepherds and a book JoJo is compiling on Jews. He calls it Yohoo Jew. JoJo has been propagandized for his whole life to think of Jews as non-human embodiments of evil and he decorates his room with Nazi paraphernalia much in the way kids of today put up posters of rap stars and sports figures.

Although his accent mingles his British origins with German inflection, Davis gives a sharp comic performance based on expressing attitudes that don’t always make sense for someone his age. Waititi's Hitler isn’t an act of mimicry; it’s a presentation of a fantasy figure who — true to the boy’s still-evolving imagination —- can’t settle into a solid form. As he relates to JoJo, he's a user-friendly Hitler.

Besides, there are enough anachronisms of speech (Hitler using the expression such as "Correctamundo," for example) to let us know that JoJo isn't meant to be taken as a history lesson.

As the Jewish girl in hiding, Thomassin McKenzie doesn't make much sense. She’s confident, and a little too unruffled, and she exists mostly so that young JoJo can learn that Jews are people, too. Isn't this a version — albeit a more benign one — of what happens in movies when black characters seem to exist so that white characters can be morally transformed?

But three cheers for young Archie Yates, who plays Yorki, JoJo's indomitably cheerful best friend. And also for Stephen Merchant who has a terrific turn as a member of the Gestapo.

Waititi does, of course, include some difficult notes that I won’t reveal here because they would qualify as spoilers. He tries to accommodate both broad comedy and war-time horror, but the horror can seem contrived. It’s as if he’s saying (and we and almost hear him saying it), “Look, I know that the war was no joke and neither was Nazism.”

It may seem odd to say that the movie tries to send its audience out of the theater with buoyed spirits. But Waititi wants to testify on behalf of the battered human spirit as it emerges into the light after the darkness of war.

It’s a nice idea but a mildly trivial one when played against what the Nazis did in the world. For all its creative efforts, JoJo Rabbit can seem a bit trivial, as well.

Perhaps that's because the best satire reveals; JoJo Rabbit confirms what we already know or, at least would like to believe. Hatred, bad; love, good.