A single mom fights for her son's education 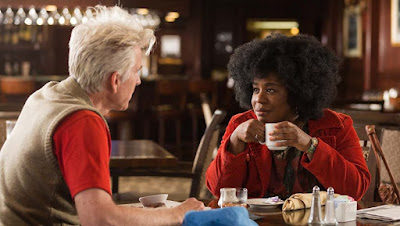 I can think of only one compelling reason to see Miss Virginia, a predictable advocacy movie that makes the case for supporting poor minority kids in private schools. That reason has nothing to do with the movie's political orientation. The reason: Uzo Aduba. Fans of Orange Is the New Black know Aduba as Suzanne "Crazy Eyes" Warren, one of the most disturbed but unforgettable residents of the series' fictional Litchfield Penitentiary. Miss Virginia affords Aduba a chance to break from her portrayal of Suzanne. Here, she plays Virginia Ford, a single mother who helped lobby for the D.C. Opportunity Scholarship Program, which offered scholarships that enabled low-income students to attend private schools. We meet Virginia in 2003 when she's trying to keep her 15-year-old son James (Niles Fitch) on track. James is being bullied at a public school where no one appreciates his artistic talent. Virginia bravely enrolls her son in an expensive private school, knowing full well that she'll have difficulty paying the tuition. She then lands a job working for a congresswoman (Aunjanue Ellis) who Virginia believes appreciates her problems. Turns out that Virginia's hope in her boss has been misplaced. Eventually, Virginia asks another member of congress (Matthew Modine) to help. The screenplay presents Virginia with any number of obstacles as she battles to save her talented son from the lure of the streets. Director R.J. Daniel Hanna has made a by-the-numbers drama that aims for inspiration. Aduba's performance reflects bone-deep, undeniable conviction, but I wouldn't look to Miss Virginia for a definitive solution to the always-troubling problem of failing schools.