Zombieland: Double Tap breaks little new ground and that may be just what the movie's fans want. 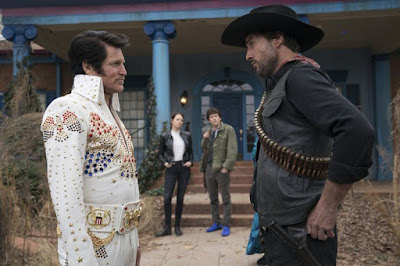 If you've seen the first Zombieland, you've pretty much seen the second.

Zombieland: Double Tap arrives 10 years after the release of the first movie with the original zombie- fighting crew offering the same brand of humor that made the first movie a hit. This isn't necessarily a bad thing.

Of course, a few new faces have been added, notably a funny Zoey Deutch as the most cheerfully clueless blonde to hit the screen in a long time.

Those who care should know that the quartet of remaining humans from the first movie is still threatened by hordes of zombies, brain-eating creatures that began spreading after the world was struck by some sort of virus.

The trio of survivors (along with Deutch's Madison) follows, maybe for no other reason than to give the movie somewhere to go. The journey provides an opportunity for Rosario Dawson to enter the fray. Dawson's Nevada presides over the Hound Dog hotel, home of Elvis memorabilia and facsimiles of Graceland's garish rooms. At this point, Luke Wilson and Thomas Middleditch show up to play odd replicas of the characters portrayed by Harrelson and Eisenberg.

It's as if Columbus and Tallahassee meet themselves and, thus, are confronted by their own ridiculousness -- or something like that.

Ruben Fleischer, who also directed the first installment, keeps the proceedings zipping along, moving fast enough to fly over the bits that don't work.

Those who find the movie superfluous won't be wrong, but there are enough laughs to combat resistance, perhaps even among those who've already seen enough zombie-apocalypses to last a lifetime.

Besides, Double Tap passes in an acceptable 99 minutes, leaving many smashed zombie heads and a whole lot of silliness in its wake.