A look at the great financial shell game

Director Steven Soderbergh brings a comic touch to The Laundromat, a story based on the Panama Papers scandal. 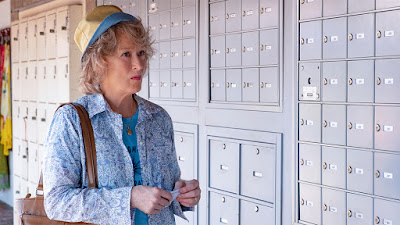 Director Steven Soderbergh aims at the absurdities of a wealth-obsessed world in The Laundromat, a Netflix movie that feels like a collection of skits revolving around the Panama Papers scandal of 2016.

That financial mess involved a massive leak of files showing how the very rich (or at least some of them) could use shell corporations to shield themselves from a variety of troublesome intrusions, matters such as income tax or various liabilities.

The Laundromat, which begs for comparison with 2015's livelier The Big Short, uses a variety of techniques to create a farrago of sketches, many presented with the kind of gimmickry that defies cinematic convention, everything from breaking the fourth wall to chapter headings such as The Meek Are Screwed.

The movie is held together by two figures played by Gary Oldman and Antonio Banderas. They are, respectively, Oldman's Jurgen Mossack and Banderas's Ramon Fonesca, characters who might have popped out of a Pinter play. They often address the audience, acting as guides to the financial maneuvering at movie's core.

Speaking in a comic German accent, Oldman seems the more pragmatic of the duo. If there's romanticism in financial chicanery, Banderas finds it.

Ramon and Jurgen are lawyers who run a firm that specializes in creating shell companies. No questions asked. Secrecy respected. If these corporations lack substance ... well ... shouldn't wealthy people be allowed to park their cash somewhere without agents from the IRS crawling all over it?

Working from a screenplay by Scott Z. Burns, Soderbergh tries to show how the damage caused by all this subterfuge can impact those whose financial calculations extend no further than trying to balance a checkbook.

Meryl Streep portrays Ellen Martin, a woman who loses her husband (James Cromwell) in a boating accident on Lake George, NY. Ellen believes that she will collect an insurance settlement from the boating company.

Ellen soon learns that the company had been duped by someone who sold it insurance from a company that wended its way toward the portfolio of an outfit that existed only on paper. Ellen turns up at various points in the story to remind us that all this high-flying finagling can actually connect to ordinary folks.

This portion of the movie introduces us to a character played by Jeffrey Wright, an accountant who lives in Nevis, a West Indian island off the beaten tourist track. Ellen shows up there to track down the company that owns the insurance company that was supposed to compensate her for her loss.

None of this is to say that The Laundromat has a great deal of bite. It's mostly bark presented by Soderbergh with the winking buoyancy of a caper movie.

As Soderbergh works his way through the story, the movie makes a long stop at the palatial home of a wealthy man (Nonso Anozie) who's dallying with his daughter's college roommate. Anozie's Charles' approach to problem-solving: Award any aggrieved party with bearer shares that he claims are worth mega-millions.

Later, we meet a slick wheeler-dealer (Mathias Schoenaerts) who tries to exert his power over a Chinese woman (Rosalind Chao) who isn't going to fall so easily.

Put all this together and you have an airy concoction that amuses even if it doesn't pack the clout we might expect. By the end, I half wondered whether Soderbergh wasn't saying that any society that allows its economy to create financial instruments (i.e., paper) that have the appearance of worth without any reality to support them deserves what it gets — in the end, a handful of nothing.