An unlikely pair of business partners

First Cow takes some patience but its rewards are worth it. 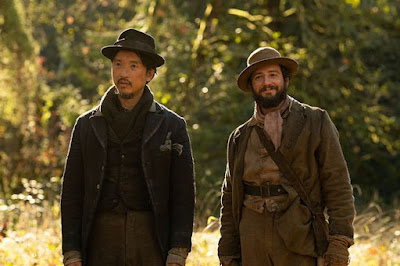 Cookie and King Lu are as unlikely a pair of felons as you'll find in movies.

Working in a style defined by a leisurely, restrained naturalism, director Kelly Reichardt (Meek's Cutoff and Wendy and Lucy) establishes an environment in which bathing is infrequent and life can be brutal. I don't mean to deter anyone from seeing Reichardt's First Cow, but she creates a mud-caked world in which you practically can smell the characters.

When we meet Cookie, he's working as a cook for a group of trappers who berate him for not finding anything more than mushrooms to eat. On one of his food searches, Cookie encounters King Lu, who's hiding naked in the woods. Cookie helps King Lu, who says he's fleeing a vengeful group of Russians. King Lu later returns the favor, inviting Cookie to share his ramshackle cabin.

By the time, Cookie and King Lu start sharing digs, Reichardt has deposited them at Fort Tillicum, a settlement populated by Native Americans and grizzled-looking white men. The local boss (Toby Jones) owns the cow that tempts Cookie and King Lu into their life of crime.

Reichardt doesn't see this odd-ball duo as criminals and neither will audiences. Cookie and King Lu are budding entrepreneurs. Lacking capital, they must be extra-enterprising about how to begin collecting their share of the great American profit stream.

The movie deals with prejudice and class differences without italicizing a point of view. As a Chinese immigrant, King Lu (Orion Lee) isn’t exactly greeted with open arms. He dreams of owning a farm. Cookie (John Magaro) has his own cockeyed ambition: He’d like to own a hotel with an adjoining bakery.

In a land where fistfights are as common as handshakes, Cookie and King Lu form an alliance that blossoms into a genuine friendship. They make a good team. With Cookie handling the baking and King Lu, the marketing, a thriving business develops even as the threat of exposure looms. We already know from the movie’s opening — set in the present — that Cookie and King Lu are fated to run into some bad luck as the tale unfolds in one lengthy flashback.

The conversations between Cookie and King Lu aren’t exactly memorable, but they have their own amusing rhythm.

First Cow requires a taste for cinema that’s in no hurry. It’s as if Reichardt wants us to feel the earth under Cookie’s boots and to understand that these men inhabit a historical moment when the passing of time felt different than it does today.

Reichardt’s approach allows for brief detours, odd moments that help make the movie memorable. Through an open window, for example, a captivated Cookie sees a Native American doing what looks like a North Woods form of Tai Chi.

At other times, the movie discovers absurd contrasts, notably Jones’s character and one of his guests chatting about what’s happening in Paris. Their discussion includes references to the colors currently dominating the Parisian fashion scene.

For Cookie and King Lu, such talk has about as much significance as a weather forecast for Mars. They do, however, know enough to realize that in this harsh world, some are faring better than others. Cookie and King Lu take a bit of getting used to, but they make for a memorable duo.