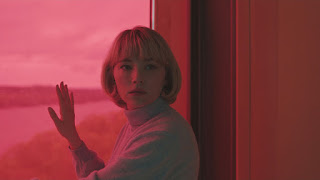 If there’s a mental disorder to be found, the movies eventually will find it. Watching Swallow, a domestic nightmare of a movie, I learned about pica, the compulsion to swallow things that don’t belong in the human digestive system. As the story unfolds, an oppressed housewife (Haley Bennett) swallows objects as diverse as a marble, a double-A battery, a push pin, and a screwdriver. These objects pass through her system, often resulting in a bloody exit. As directed by Carlo Mirabella-Davis, Swallow avoids disease of the week pieties; it's less a story about a woman with a mental disorder than a metaphoric look at a woman who’s being held prisoner by her marriage to a young businessman (Austin Stowell) whose life is run by his father and mother (David Rasche and Elisabeth Marvel). Sporting a Kewpie Doll hair cut and rosy cheeks, Bennett’s Hunter initially seems like a parody of a wife, a woman desperately trying to meet her husband's outmoded standards. Much of the movie takes place in the aggressively modern home Hunter shares with her affluent husband, the man who — at least in his view — rescued her from a retail job selling toiletries. The movie's pivotal event arrives when Hunter learns that she’s pregnant. If she has a child, her fate will be sealed. She’ll never escape her husband’s family’s clutches. Hunter’s in-laws try to obtain help for her disorder, but their objective has less to do with Hunter’s well-being than with maintaining the family’s pubic facade. Watching Hunter swallow the various objects that entice her proves difficult. Many will find themselves turning away from the screen. The screenplay puts a lot of weight (too much, perhaps) on a late-picture encounter between Hunter and a man (Denis O'Hare) who played an important role in the formation of her psyche. But Mirabella-Davis' ultra-composed images and Bennett's wide-eyed performance give Swallow an edge you won't soon forget. 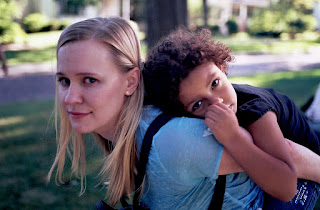 If you're squeamish about vaginal bleeding, you may not want to see Saint Frances, a movie about a nanny (Kelly O'Sullivan) who finds some confidence when she becomes involved with the two women who are parents to young Frances (Ramona Edith-Williams), a charmingly assertive six-year-old girl. Then again, if you're a guy you might want to ask yourself why references to vaginal bleeding on screen should be any more unsettling than the copious amount of plasma spilled in the average action movie. As is the case with many current characters, O'Sullivan's 34-year-old Bridget is single and adrift. She meets a guy (Max Lipchitz) but doesn't want to formalize her relationship with him, even after she becomes pregnant. Frances parents,
a mixed-race lesbian couple played by Charin Alvarez and Lily Mojekwu), have problems of their own. Mojeku’s character works constantly and Alvarez’s character feels the strain of having a new baby in the home. Enter Bridget as the nanny who’s supposed to help relieve some of that stress so that Alvarez's character doesn't fall any deeper into postpartum depression. Bridget bonds with Frances and begins to feel a connection to her employers. Without over- or underplaying the moment, the movie takes a level-headed approach to Bridget's decision to have an abortion. Working from a screenplay by O'Sullivan, director Alex Thompson, ups the pressures on his characters until they reach a cathartic boiling point. I won't say that Saint Frances is a great movie but it succeeds in involving us with characters who are dealing with lots of problems — all at the same time. In the end, it’s probably best to view Saint Frances as a story about how women develop sustaining connections and what those connections can mean to each of them and to the group as a whole.