Can he coach his way to sobriety?

Ben Affleck plays an alcoholic basketball coach who takes over a failing team. 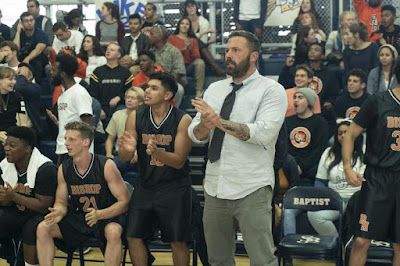 An abysmal high school basketball team finds its footing when the school's alcoholic former star takes over coaching duties. Ben Affleck portrays Jack Cunningham, a man who peaked as a basketball player at Bishop Hayes High School and whose refrigerator now is stocked with beer. Jack spends his days working construction and his evenings at the local bar. When he showers, he places a can of beer where others might put a bottle of shampoo.

Director Gavin O’Connor, who previously directed Affleck in The Accountant, quickly establishes Jack’s dissolute life. Bearded and grim of temperament, Jack can be loving with his nieces and nephews but he clearly rages inside -- when he's not reeling in a woozy alcohol-induced haze.

Working in mostly somber tones, Gavin draws on Affleck’s deeply realized performance to anchor a movie that tries, perhaps a little too hard, to avoid the obvious moves we expect from a story about an underdog team overcoming great odds.

Jack returns to basketball when a priest (John Aylward) asks him to take over the school’s coaching duties from a man who recently suffered a heart attack. The team’s assistant coach (Al Madrigal) teaches math. He's burdened by too family responsibilities to be the head coach.

An unruly bunch, the Bishop Hayes team must learn discipline. Melvin Gregg plays the team’s tallest member, a kid who displays more confidence than his talent has earned. Kenny (Will Ropp) spends too much time flirting with coeds. Brandon Wilson portrays the player with the most talent. Jack must convince the kid that he can lead the team to success.

But the players, many from tough backgrounds, play second fiddle to Jack’s alcoholism. O’Connor skimps on game footage, preferring to show the sidelines where a hot-tempered Jack spews profanity at the refs. We never really learn a lot about how Jack schools the team: O'Connor presents Jack's coaching in incendiary flashes.

We learn the reason for Jack’s bitterness when the movie expands to introduce us to Jack’s estranged wife and his immediate family, scenes that might easily have been sacrificed to give the kids on Jack's team more off-the-court presence.

The Way Back isn’t likely to join Hoosiers as one of the great high school basketball movies. The movie is too committed to the grim realities of Jack’s alcoholism to swell with feel-good notes.

But credit Affleck with making Jack’s torments feel real. Basketball rivalries aside, the inescapable battle here is between Jack and the bottle.