Wendy feels tipsy and offkey right from the start 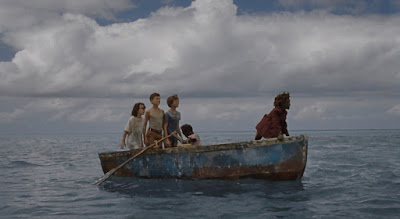 Director Benh Zeitlin follows his much-admired Beasts of the Southern Wild (2012) with Wendy, a newly imagined version of the Peter Pan story that feels too disarrayed to captivate.

This time, I was put off by Zeitlin's approach. He pushes us into scenes with close-ups, eschewing anything as orienting as an establishing shot. And as the story -- stocked by a cast of children -- unfolded I couldn't help wonder for whom Zeitlin had made this woozy film. Wendy could be too confusing for kids and too literal for adults who may find the screenplay's on-the-nose dialogue and obvious didacticism more deflating than uplifting.

Wendy (Devin France) lives with her mom (Shay Walker) and her twin brothers (Gavin and Cage Naquin) in a small Louisiana town where mom runs a diner located next to the railroad tracks.

But let's begin at the beginning. After a short introduction to the diner and Wendy's home life, she and her brothers hop a freight. On an earlier night, Wendy had spotted Peter running ghost-like across the top of a passing train, leaping from car-to-car. Wendy may only be 10, but she's already wondering whether small-town life might be uneventful and boring. Where's the adventure? She's heard Peter's call of the wild.

Fable trumps logic and Wendy and her brothers wind up on a volcanic island where Peter and his crew of Lost Boys are committed to remaining young forever.

A glowing sea creature that the youngsters call "Mother" lives off the island's coast and seems to be the source of the boys' eternal youth.

But wait. It turns out loss can begin the aging process. When one of the twins vanishes, his broken-hearted sibling begins to age. One of his hands takes on the withered look of old age. Duly alarmed, he invites Peter to stop the onslaught of deterioration by cutting off the offending appendage.

Adults inhabit the island, too. These withered folks look like aging hippies and evidently were unable to maintain their perpetual youth. Lest the proceedings endorse romanticized notions of the way wildness dies when children begin to grow up, Zeitlin makes sure that Wendy learns that growing up also qualifies as an adventure, too -- perhaps the greatest adventure of all.

Images float by like boats unmoored from a dock as Zeitlin makes references to some of the trademark characters (Captain Hook, for example) of J.M. Barrie's original. The kids make a lot of noise and so does the movie, which includes underwater sequences, steaming geysers, and a volcano that long-ago erupted and killed most of the island's residents.

Focusing the film on Wendy gives the tale a girl's spin. It's not enough, even with numerous sequences that exalt in the joy of childhood play. Opinions surely will vary, but I'd call Wendy a sophomore misfire and leave it at that.