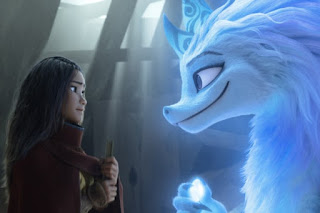 Disney's Raya and the Last Dragon stands as a beautifully rendered piece of animated storytelling. The movie leans heavily on action before delivering a message about overcoming risks involved in trusting people who might otherwise be considered foes.
The story centers on Raya (Kelly Marie Tran), a young woman who lives in a world that has been divided into five distinct territories. Raya's father dreams of uniting the planet's various factions into a harmoniously idyllic country named Kumandra.
The movie's mythology involves dragons, an evil force called Druun, and thwarted attempts to secure global peace that often lead to battles.
Eventually, Raya establishes a connection with the last dragon, a winsome creature named Sisu (Awkwafina). When necessary, Sisu assumes human form, turning herself into a feisty older woman.
A melding of south-east Asian cultures, Last Dragon has a generic quality when it comes to ethnicity, but directors Don Hall and Carlos Lopez Estrada wisely employ a large ensemble of Asian actors to give voice to the characters.
Screenwriters Adele Lim and Qui Nguyen seldom allow the movie’s  better angels to overwhelm the action, creating an on-going rivalry between Raya and Namaari (Gemma Chan), a young warrior woman and Raya's long-time enemy.
Both women are trying to retrieve pieces of a gem that 6has the power to ward off the Druun, an inky floating cloud that turns living creatures into stone.
Dragons once kept people safe from the Druun, but the dragons -- save the one of the title -- have been turned to stone. Clearly, the Druun must be contained and, by the end, the movie makes it clear that cooperation can be more powerful tool than combat when it comes to keeping people safe.
All of this is leavened with typical humor and colorful characters who join Raya on her quest to recover pieces of the shattered gem:
Izaac Wang gives voice to a young chef who joins Raya's quest, along with an ogre-sized character named Tong (Benedict Wong), and a battling baby.
There's also Tuk Tuk a large snail-like creature that can roll into a ball. Tuk Tuk serves as the vehicle that transports Raya through her many adventures.
Although the story may be a bit complex for younger audiences, the plot proves easy enough to follow. The dialogue has more to do with 2021 than any mythical past, but Raya emerges as a visually imaginative and involving  piece of animated entertainment.
Posted by Robert Denerstein at 5:35 PM