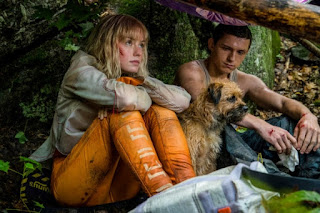 First, a quick look at the world of Chaos Walking, a futuristic story about warring deep-space colonists that trips over one of its central conceits. In Chaos Walking, men can hear each other's thoughts, a power achieved upon arrival on this distant planet.
Adapting a YA novel by Patrick Ness, director Doug Limon allows us to hear the thoughts of the male characters who live in the Prentisstown colony. Not only does the collective babble create confusion, it adds little by way of interest because so many of the thoughts we hear tend to be obvious or repetitive.
Having been raised in Prentisstown, Todd (Tom Holland) only knows the world of men. The town's women all died shortly after Todd's birth: Todd has bought the official line, which insists the women were killed by the Spackle, the original residents of this unnamed planet.
When we meet him, Todd mostly accepts the local philosophy, a kill-or-be-killed ethos that has turned Prentisstown into a grim dystopian outpost. Todd lives with his father Ben (Damian Bichir) and accepts the iron-fisted discipline of Prentisstown's mayor (Mads Mikkelsen).
Todd's world changes when Viola (Daisy Ridley) arrives on the planet after the crash of her spaceship during an interplanetary scouting mission dispatched by a larger vessel.
Most of the story puts Todd and Viola on the run, as they try to find a way to signal Viola's mothership so that it won't leave her behind.
Todd's dog Manchee tags along. Happily, there's no suggestion that anyone can read Manchee's thoughts or that Manchee can penetrate anyone else's mind.
Having never seen a woman before, Todd's thoughts often put him in an embarrassing position vis-a-vis Viola, who can hear his thoughts.
Men, by the way, can't hear women's thoughts, thus leading the movie toward a limp metaphor about gender differences: Transparent creatures that they are, men can't hear women. Some of the men are deeply opposed to any female intrusion into their private worlds.
The supporting cast proves largely irrelevant. David Oyelowo portrays Aaron, a censorious preacher who occasionally pops up to orate. Cynthia Erivo's Hildy leans another colony, one that still has women and is far more peaceable than Prentisstown.
Exoticism proves in short supply. The planet on which the movie takes place looks pretty much like Earth and the various encounters that Todd and Viola have with others aren't all that intriguing. The action (a white-water episode, for example) seems pretty familiar, as well.
The chemistry between Holland and Ridley doesn't exactly sizzle, and Mikkelsen's low-key villainy breaks little new ground.
Aside from the discovery of a vast, previously crashed ship, Chaos Walking lacks sci-fi scale. It almost feels as if the characters are playing at inhabiting a new planet without ever having left Earth.
I've read that The Knife of Never Letting Go is the first in the Chaos Walking series.  My commercial instincts are extremely fallible, so take this with a grain of salt: It's difficult for me to imagine that more Chaos Walking movies loom.
Posted by Robert Denerstein at 5:35 PM