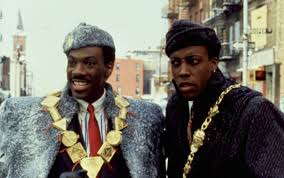 Zamunda -- the fictional African country that Eddie Murphy and Arsenio Hall called home in Coming to America -- tops my list of places I never thought merited a second visit.  The first movie was funny but didn't exactly leave a ton of unanswered questions.
Coming 2 America emerges anyway and fans of the first movie probably will be happy that it has.
A word on Murphy, who became a major movie star during the 1980s and 1990s, but fell off during the 21st Century when his movies often were less than dominant. Dolemite Is My Name (2019) received mostly positive reviews, but a Murphy movie no longer felt like a big-screen event.
Still, Murphy has remained a revered star in the comedy universe and -- at least in my mind -- and Coming 2 America has the feel of what in non-Covid times would have been considered a major commercial statement.
This time, it's back to Zamunda with only the briefest of stops in Queens, where Murphy and Hall don tons of makeup and reprise the characters who occupied the My T Sharp barbershop of the first installment.
Mostly, though, the movie flows in a less hilarious but generally palatable direction.
In the original, Murphy's Prince Akeem came to America looking for  love. In the new movie, the borough of Queens heads to Africa, where Akeem's illegitimate son is groomed to take over the Zamundan throne. And, no, the prince didn't know he had a son and heir.
Akeem's son Lavelle Junson (Jermaine Fowler) dominates much of the movie. A typical Queens resident, Lavelle is lured to Zamunda by the promise of wealth and power -- not to mention the urging of his rapacious mother (Leslie Jones), the woman with whom Prince Akeem had a long-forgotten encounter.
Lavelle struggles to adapt to Zamundan ways, which require him to pass a series of tests to prove his nobility. An encounter with a lion proves the funniest of the new prince's trials. If he survives cutting the whiskers off a lion, he must be the real deal.
There's also a question about whether Lavelle will marry the voluptuous daughter of rival King Izzi, played by  Wesley Snipes who demonstrated his flair for comedy in Dolemite. For Izzy, it's either unity via marriage or war.
Tracy Morgan signs on as Uncle Reem, the Queens-based father figure in Lavelle's life.
And, of course, Hall returns as Semmi.
Also back: Shari Headley as Queen Lisa, the love of Akeem's life and now the mother of his three daughters, one of whom (KiKi Layne) would be the next ruler of Zamunda were it not for the country's insistence that only males can ascend to the throne.
James Earl Jones and John Amos also reprise roles from the first installment.
I could go on, but you get the idea: The movie can feel stuffed to the breaking point in the way sequels sometimes do.
Director Craig Brewer, who handled directing chores on Dolemite, mounts a slick, showy production that goes heavy on musical numbers and includes cameos from Morgan Freeman and Trevor Noah, as well as musical appearances by Gladys Knight and Salt-N-Pepa.
OK, enough.
Coming 2 America isn't fall-down funny, but it has an infectiously likable vibe that makes the movie pleasurable enough as it traverses safe comic ground. Maybe that's why Coming 2 America left  me with a smile and no sharp regrets about a second visit to Zamunda.
Posted by Robert Denerstein at 4:10 PM