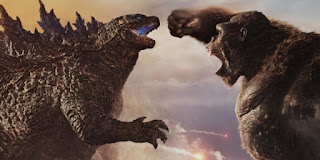 The final battle between Godzilla and Kong takes place in Hong Kong, where the two behemoths wreak what appears to be billions of dollars worth of collateral damage, smashing high-rise after high-rise as they crash into buildings and exchange blows.
With protesters filling the streets of Hong Kong and many of the city’s residents trying to stave off restrictions Beijing wants to impose  I couldn't help thinking that the city had enough trouble without two imaginary monsters stomping it into rubble.
So, no, I wasn’t amused by Godzilla vs. Kong, the latest movie to bring the two classic monsters to life — or, in this case, digital life.
The only interesting character in this blaring, disheveled movie is Kong, the sensitive but powerful mega-ape who, in this installment, displays affection for a Jia, (Kaylee Hottle), a child who can’t hear or speak.
The movie’s human characters are reduced to gaping spectators by a negligible excuse of a plot.  As near as one can tell, the story involves an evil corporate czar (Damian Bichir) who attempts to harness an energy source, a trip to Kong’s home in Hollow Earth, and the tag-along efforts of a couple of adults --Alexander Skarsgard as a scientist and Rebecca Hall, the woman who has adopted Hottle's Jia and who presides over Kong's synthetic eco-system, the place where the movie begins.
It’s possible, I suppose, to argue that acting, plot, and even clarity of storytelling hardly matter. What most folks want from a movie that pits a giant ape against a towering sea monster is rampant destruction.
Mindful of that, the filmmakers not only ravage Hong Kong but an entire Navy fleet that's escorting Kong to Antarctica so that he can dive into the hole that will lead him to Hollow Earth and the much-coveted energy source.
The movie's plot seems so preposterous that I half expect to find it being advanced by one or another of the various groups that currently specialize in bizarre conspiracy theories.
A parallel story that seems to have been added for youth-appeal introduces a teen-age girl (Millie Bobby Brown),  her nerdy companion (Julian Dennison), and a podcaster (Brian Tyree Henry) who specializes in conspiracy theories related to the plot.
The movie begins with Kong awakening in the artificial environment where he seems to have resided since his last big-screen appearance. Kong yawns, rises, scratches his butt, and showers under a waterfall.
The opening gave me hope that the filmmakers, under the direction of Adam Wingard, might be on the verge of delivering a comic take instead of the usual monster mash in which Kong celebrates his victory over various creatures by ripping off their heads and raising them as trophies.
But, no.
The case of Godzilla vs. Kong may triumph in the supreme court of movies otherwise known as the box office. But the movie sacrifices any hint of mystery and suspense for noisy displays of blunt force that leave us with only one question: Is this a movie or a demolition derby?
Posted by Robert Denerstein at 4:10 PM

Amazingly missing the message, but it is expected from drama and romance critics forced to review a Godzilla movie. Missing key allegorical messages that is the center of this movie's plot. As we all are entitled to our opinions, this review, like every other, continues the time honored American critic tradition of missing the point of a post 1970s Godzilla movie (2.5/10 Critic's Critic review)

The series has and always will be a demolition derby LOL