A far-fetched but likable romance 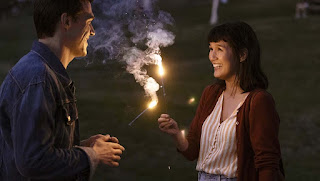 Many movies begin with a contrivance and some are impossible without them.
That might be the case with Long Weekend, a romance about a young writer who meets a woman named Vienna and falls madly in love with her. She reciprocates.
Of course, there’s a catch. The young woman reveals little about herself until she offers an explanation that stands as the movie's central conceit. I won't reveal it here.
Writer/director Steve Basilone had an opportunity to play with reality, perception, and perhaps even the power of wishful delusion.  Instead, Basilone opted simply to move ahead with a romantic comedy — an approach that may account for both the movie’s strengths and its weaknesses.
Long Weekend doesn’t ask us to spend much time wondering whether Bart  (Finn  Wittrock) is having a real experience or whether a fantasy lover has sprung from Bart’s recent emotional wounds.
Bart’s Mom recently died. He still hasn’t recovered from a recent break-up. He also may be suffering from a serious health problem — judging by the many calls he receives from his doctor. He ignores them.
A movie such as Long Weekend  relies heavily on its actors. We must enjoy spending time with the characters they create, at least enough to forget about the many ways in which the movie willingly challenges credibility.
Wittrock has soap-opera handsomeness and earnestness and Zoe Chao, the movie's real star, brings enough eccentric charm to her portrayal of Vienna to keep the movie watchable.
Damon Wayans and Casey Wilson add flavor as Bart's best friends, a couple that invites him to move into their garage when he (an aspiring novelist) runs out of money.
Scenes depicting the brief but intense encounter between Bart and Vienna are easy to take, although they mostly stick to the surface.
I suppose there may be a bit of underlying reality here: It’s probably true that every love affair begins with many unknowns and some unknowables. Love, after all, requires a leap of faith.
Basilone creates a mostly likable romance that can't cross the finish line while keeping its many contrivances from spawning even more contrivances. When it concludes by focusing on Bart, the least interesting of the romantic duo, the story goes flat.
For all that, Long Weekend remains an easy-going attempt to freshen romcom formula that’s best when it relies on the oldest of values, Chao’s lively appeal.
Posted by Robert Denerstein at 12:35 PM

Would you recommend seeing this film? Thanks.

If you want to see a nice performance by Zoe Chao and are willing to accept the movie's many contrivances, then, yes, I'd give it a try. But as you may have noticed, ny review is mixed. That means the movie has some virtues and, in this case, a variety of flaws -- all wrapped in a package that's easy-going enough not raise too many hackles.

I'm just following up. Thanks.

Not sure what you mean. I've pretty much said all I have to say about "Long Weekend" and my review of same

Did the contrivances get in the way of your enjoyment of the film or were you able to simply overlook them? I had written this before, but for some reason it doesn't seem to have shown up.

I'm not sure why you're asking me these questions. I think I'm done talking about this movie unless your clarify what you want\. I had a mixed response to the movie, didn't overlook its contrivances and still enjoyed some of it, as my review made clear.
Say a friend asks, "How was the dinner?"
"Well," you say, "the appetizers were great, the main dish was so-so, and the dessert was a bit disappointing, My dinner companion's dessert was delicious," though.
Mixed response.