A western that stays close to the sod 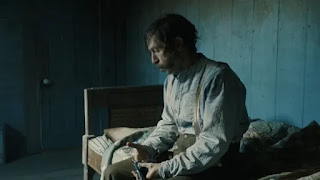 In Old Henry, Tim Blake Nelson plays a widowed farmer living with his son (Gavin Lewis) in the Oklahoma territory during the early days of the 20th Century.
Blake portrays Henry McCarty, a farmer whose few words are usually choice. Looking as if he hasn't bathed since the turn of the century, Henry is an odd duck, a man with a droopy right eye, stubble as thick as scrub brush, and a sour disposition.
Despite Henry's dishevelment, there's something confident about the way he navigates his isolated world. On a ride around his property, Henry discovers a badly wounded man (Scott Haze) and a bag full of money.
Henry brings Haze's Curry to his rundown farm and tends to a bullet wound that has brought the unconscious Curry close to death.
When a saddle bag loaded with cash turns up, you can be sure that trouble won't be far behind. It arrives in the form of Ketchum (Stephen Dorff), a smooth talker who says that he's a lawman in search of Curry and some stolen money.
Not a trusting soul by nature, Henry won't give Curry up and his interactions with Ketchum and his crew begin to surprise a son that sees his father as a mud-covered loser.
Writer/director Potsy Ponciroli deftly builds the movie toward the confrontation we know is coming.
We've seen naturalistic westerns before, but Nelson gives Old Henry a convincingly raw feeling and the movie offers plenty of satisfying revisionism about the West and the characters who inhabited it.
There are surprises -- including a whopper at the end -- as the movie slowly reveals an old but reliable theme: The past has a way of catching up with folks and squaring off against them.
Posted by Robert Denerstein at 5:35 PM