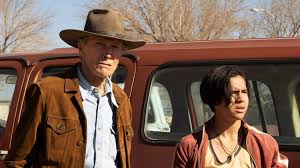 If you've reached an age at which you've begun to think of yourself as old or at least as aging, you'll be watching Clint Eastwood's Cry Macho through a lens that measures Eastwood's every move against the passage of time.
Eastwood is 91 and although the movie requires him to throw a punch and ride a horse, his walk has taken on a stiff-legged quality. His posture hints at a stoop.
Is that Eastwood or is it Eastwood's interpretation of the ruined cowboy he's playing? I don't know but Eastwood still commands the screen in ways that insist that you watch.
Make no mistake. Eastwood, who also directed, still knows how to land a line even when he's not sneering his way through a movie that doesn't quite commit to the odd-couple pairing of an irascible old man and a rebellious teenager -- or much of anything else for that matter.
Based on a novel by N. Richard Nash,  Cry Macho tells the story of a washed-up rodeo star who survived alcoholism, pills, a horrible accident in the arena, as well as the grief of losing a wife and child in an auto accident.
That's at least two trunks worth of baggage and it would break a lesser man, but we know that Eastwood is made of sterner stuff.
Eastwood's Mike Milo owes a debt to his rancher boss (Dwight Yoakam). Yoakam's Howard Polk wants Mike to travel from Texas to Mexico to retrieve Rafa (Eduardo Minett), the boss's 13-year-old son, a kid who's been living a wild life with his mother (Fernanda Urrejola.)
After some difficulties in Mexico City and an awkward scene in which Urrejola’s character trie- to seduce Mike, man and boy hit the road where they gradually develop a friendship.
Thanks to a broken-down car, the movie makes a lengthy stop in a small Mexican town where Mike and Rafa begin to draw closer. The two also are treated to the hospitality of Marta (Natalia Traven), an earth-mother type who runs a cantina and takes care of her cute grandchildren.
Some romantic sparks are lit between Mike and Marta, but Eastwood pretty much keeps them at simmer levels.
Meanwhile, a thug (Horacio Garcia Rojas) who works for the boy's mother pursues the unlikely duo, both of whom need nurturing.
Of course, there’s a speech in which Eastwood tells his young charge that the macho life isn’t all that it’s cracked up to be, a message Eastwood has delivered better in other movies.
I wouldn't say that Cry Macho is boring. But the material has the musty aroma of second-rate fiction that's neither totally off-putting nor deeply engaging.
Cry Macho becomes a kind of casual meander that hits some false notes (we're expected to believe that Mike still can ride a bucking bronco) but otherwise passes without making much of  a mark -- other than to remind us that Eastwood can do what he chooses and let the chips fall where they may.
As for the title, Macho is the name of a rooster that Rafa has trained to fight.
Posted by Robert Denerstein at 1:10 PM