‘Figaro’ falls onto the plus side of the ledger 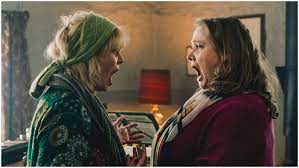 Falling for Figaro runs on familiar fuel -- the most notable ingredient being a story about an aspiring singer who wants to win a major contest so that she can jump-start an opera career.
A bit of eccentricity (the movie takes place mostly in Scotland) and a moderate helping of opera keeps the movie from singing an aria composed entirely of cliches.
A successful London financier, Danielle Macdonald's Millie has always wanted to be an opera singer. Early on, Millie walks away from a lucrative promotion at her firm. She heads for rural Scotland where she hopes to be accepted as a student by Megan Geoffrey-Bishop (Joanna Lumley), an irascible former diva in need of extra bucks.
Millie not only sacrifices money, she also leaves her London-based boyfriend (Shazad Latif) and faces a torrent of abuse from Geoffrey-Bishop, who peppers the movie with acerbic one-liners.
A sullen handyman (Hugh Skinner) does Geoffrey-Bishop's bidding but puts up with her because he, too, is a budding singer.
The town has one inn, presided over by a flinty, kilt-wearing gentleman (Gary Lewis) who roots for Millie’s success.
I don't know whether Macdonald (Patti Cakes, Dumplin,' and French Exit) and Skinner did their own singing, but their characters play off one another with ease.
Macdonald is determined enough to make the far-fetched credible, and Skinner has brooding Heathcliff-level charm. Lumley makes the most of an opportunity to play a venomous taskmaster who, of course, really cares about her students.
The music -- from various operas including Mozart’s Le Nozze di Figaro -- elevates material that might otherwise have left director Ben Lewin (The Catcher Was a Spy and The Sessions) with nothing to do but trample his way across well trod ground.
Posted by Robert Denerstein at 3:35 PM