Is her husband a traitor or a hero? 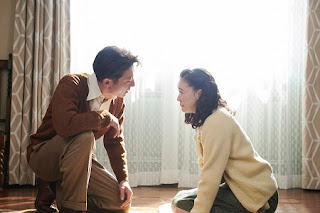 To fully appreciate the Japanese movie Wife of a Spy, it helps to know something about Japan just before World War II.  By 1940, the year the movie begins, Japan already had invaded Manchuria, imposing its brutal authority on the area's Chinese population.
Japan already was embracing traditionalism and authoritarianism, but not all of its citizens welcomed an order that, among other things, thrived on anti-Western sentiment.
Director Kiyoshi Kurosawa sets his story in such a climate, deftly personalizing a politically charged drama. Kurosawa introduces us to a business man (Issey Takahashi) who opposes the current isolationist tilt and a wife (Yu Aoi) who gradually learns about her husband's clandestine activities.
Although the historical trappings are essential, Wife of a Spy also can be viewed as a complex story about a woman who faces issues of trust and betrayal.
An internationalist by trade,  Takahashi's Yusaku runs an import-export-business. Under the guise of buying cheap supplies, he travels to Manchuria where he films some of the atrocities he discovers, the main one involving biological experimentation.
Yusaku hopes the US will be drawn into the war once the country learns about Japanese transgressions.  Japan, he believes, will lose and the country’s place in a modern global future will be secured.
Once Aoi's Satoko begins to learn about her husband's extracurricular activities, she’s confronted with a challenging question: Is her husband a hero or a traitor? And how can this model Japanese wife possibly tell?
Satoko opts for heroism, helping her husband execute a plot he's devised to get information about Manchuria into American hands.
The intrigue involves a mysterious woman who accompanies Yusaku to Kobe after his Manchurian trip. Is she a paramour or an accomplice?
As we watch, we begin to share Satoko’s apprehensions. We try to determine who’s tricking whom and for what reason?
Although the movie includes one dream sequence, Kurosawa clearly lays out a story that begins to introduce additional characters. Masahiro Higashide portrays a childhood friend of Yusaku and Satoko’s, a once-gentle young man who has become a soldier and a torturer.
Yusaku's nephew (Ryota Bando) works for his uncle and helps him with amateur filmmaking efforts, which play a role in bringing the story to its conclusion.
Credit Kurosawa with making a drama in which the interpersonal and the political are so intertwined, it’s impossible to distinguish one from the other. His movie is ambiguous without being muddled.
The threat of war and the war itself give Kurosawa's absorbing, puzzle of a movie an epic quality that adds to the feeling that we're watching a movie in which the stakes hardly could be higher.
Posted by Robert Denerstein at 3:10 PM