This immigration story drowns in problems 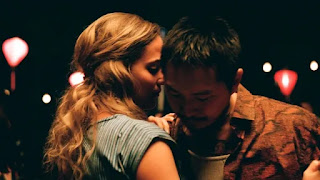 Topical subject matter isn't always enough to carry a movie.
That's the case with Blue Bayou, an overloaded immigration drama from director Justin Chon, who also wrote and stars in the movie.
Chon plays Antonio LeBlanc, a Louisiana-bred man who arrived in the US at the age of three. Born in Korea, Antonio speaks with a southern accent and has never thought of himself as anything but  American. He has only dim memories of the Korean mother who gave him up for adoption.
Antonio lives with Kathy (Alicia Vikander), a woman with a daughter (Sydney Kowalske) Antonio loves and who loves him back. The couple is expecting another child.
Sometimes, it seems as if Chon never met a problem he could resist; his screenplay staggers under the weight of too many difficulties.
A tattoo artist by trade, Antonio wants to earn more money to support his growing family. An early brush with the law resulted in a criminal record, which means he has trouble landing jobs.
Many of the scenes (an early job interview, for example) have power, but Antonio's personal life proves overly complicated and fraught.
Vikander's Kathy was once married to a New Orleans cop (Mark O'Brien), a man who fears Antonio and Kathy will move to Korea and take his daughter with them. The former husband's policeman partner, an unabashed racist played by Emory Cohen, has it in for Antonio.
Pushed into trouble with the law, Antonio comes to the attention of ICE. Turns out that his adoptive parents never filled out the proper forms, which means Antonio is classified as an illegal immigrant.
An immigration attorney (Vondie Curtis-Hall) knows Antonio faces an uphill struggle but tries to keep Antonio from being deported.
To further complicate the story, Antonio must persuade his adoptive mother to testify on his behalf -- not an easy task as it turns out. He hasn't spoken to her for more than a decade.  The reasons for this  eventually are revealed.
Antonio also makes the acquaintance of a Vietnamese woman (Lin-Dan Pham). Although she's dying of cancer, she shares her experience as a Vietnamese American, inviting Antonio and his family to a festive family lunch.
Chon proves convincing as a desperate man but the screenplay piles obstacles so high they begin to lose credibility. In reality, such a story might be possible. On screen, a bit of honing would have helped.
Posted by Robert Denerstein at 7:30 PM