A look at an artist obsessed with cats 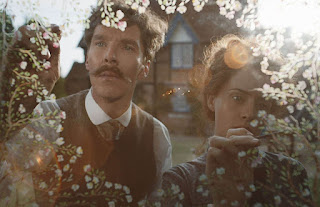 In the well-leafed pages of art history, you’d be hard-pressed to find references to an artist whose sole preoccupation was with cats. Louis Wain was such an artist, a man who drew anthropomorphic pictures of cats for newspapers. He became popular for adding humor and color to the day’s drab news.
In The Electrical Life of Louis Wain, Benedict Cumberbatch immerses in eccentricity as an oddball artist who became increasingly deranged as his life progressed. Wain’s art also became more interesting and adventurous as he aged and retreated into his own world.
If you like psychedelic cats, Wain's your man. He might have been first on the block. Look it up.
Some believed Wain to be schizophrenic. Maybe he was simply demented. Or maybe he fell somewhere on the spectrum of personalities destined to inhabit worlds most of us are content  to visit only in biographical movies.
Director Will Sharpe makes use of a deeply committed performance from Cumberbatch to bring the artist to life in ways that can be amusing, although the movie never quite makes a case for its existence.
Put another way, Electrical Life teeters on the edge of success without ever quite falling over.
The story’s key event involves Wain’s marriage to Emily (Claire Foy), a match that scandalized Wain’s five sisters, women who regarded Emily as beneath the family’s station.
Class distinctions aside, the union enables Wain to separate from his sisters, establishing an independent residence with a woman who tapped into his heretofore neglected capacity for happiness.
Emily had been working for the family as a tutor to the daughters of the Wain sisters, a group presided over by Caroline (Andrea Riseborough), the oldest and most severe of the sisters.
Wain's obsession with cats begins when he and Emily save a stray. Life seems good, but as we know, Victorian stories seldom escape misery.
Emily’s early death from cancer left Wain alone and bereft. Her departure also abandons the movie to Wain's eccentricities and hallucinations, some of which Sharpe brings to life with mixed results.
The story also highlights Wain’s financial ineptitude; he didn’t seem to care whether publishers took advantage of him. He never bothered to copyright his work. He's the artist of cliche; i.e., one who couldn't be bothered with contracts or terms of compensation.
Lest we get lost in all of this, a  narration is provided by Olivia Colman, who has been charged with contextualizing the Victorian England in which Wain labored. She also helps clarify the movie’s title: Wain became obsessed with the new science of electricity.
Several images at the end of the film have hallucinatory beauty that may not exactly fit the rest of the movie but make a pleasurable appearance nonetheless.
Overall, Electrical Life wavers as it seeks a tone that matches Wain’s eccentricities. The story wears out as it moves through Wain’s massively disheveled life.
Who knows? I might have liked it better if I weren't a dog person.
Posted by Robert Denerstein at 1:10 PM