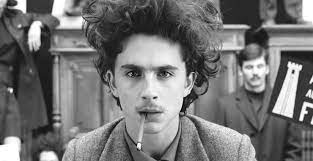 Wes Anderson is an artful filmmaker and master miniaturist, a director who knows how to situate his films in the rich stream of cinema history. He's idiosyncratic and hardly ever seems to make a film in which his main objective is to soothe an audience. These are admirable traits and also the reasons why I always scold myself when I can't fully get behind an Anderson film.
That's the case with The French Dispatch, a movie  apparently intended as a tribute to great magazine journalism.
Bill Murray plays the editor of the French Dispatch. Headquartered in the city of Ennui along the Blasé river, the Dispatch has built its reputation on the power of the written word and the idiosyncratic journalistic eye.
Murray articulates two rules for those who work for the Dispatch. Don't cry and write in a way that makes it seem as if you did it on purpose.
The plan: When Murray's Arthur Howitzer Jr. dies, the paper dies with him -- perhaps Anderson's way of acknowledging the disappearance of Great Editors; i.e., editorial titans who knew how to work with "difficult" writers -- and had never heard of focus groups, much less consulted one.
An anthology divided into three parts with a prologue, the movie focuses on the Dispatch, a New Yorker-like publication complete with a table of contents and drawings. The meat of the movie involves three Dispatch feature pieces presented in black-and-white, color, and mixtures of the two.
First among them, The Concrete Masterpiece, a story in which an art maven (Tilda Swinton) talks about a brilliant rebel painter named Moses Rosenthaler (Benicio Del Toro).
Imprisoned for murder, Rosenthaler uses a prison guard (Lea Seydoux) as a model. Adrien Brody enters the story as an art dealer who wants to exploit Moses's work -- and is, therefore, outraged when Rosenthaler produces frescos on the prison's walls. How the hell can those be sold?
The best and most genuinely bizarre of the three pieces, The Concrete Masterpiece features Del Toro as a genius who seems to have separated himself from the constraints of ordinary morality.
Next up, Revisions to a Manifesto featuring Timothee Chalamet and Frances McDormand. McDormand plays a writer caught up in what looks like the student rebellion of 1968. She develops a relationship  -- as a kind of mentor and sexual partner -- for Chalamet's character, leader of a student revolt. She also crosses  an ethical line, helping Chalamet's character write a manifesto.
By the time of the second movie, I found myself asking just how much quirkiness and intricate detailing I could tolerate.
OK, part three, The Private Dining Room of the Police Commissioner. Jeffrey Wright portrays a writer who's working on a profile of a chef. Listening to Wright's delivery of the segment’s abundant dialogue has its rewards. But Private Dining Room, which also makes room for animation and crime, seems crowded to the point of indulgence.
Almost every Anderson movie has a finely etched quality as well as a whimsical sense of humor and French Dispatch is not without those qualities. Still ....
I wouldn’t say that Anderson has chiseled the life out of his movie; it's more that the chiseling almost becomes the life of an intricate inward-looking movie that carves out a place for itself — but not always for an audience.
Is it possible for a movie to talk to itself?
Posted by Robert Denerstein at 4:10 PM