Two quick hits on movies I missed. Put these brief reviews under the heading “Better Late Than Never.” Set in Manchester, New Hampshire, Small Engine Repair adapts a play by John Pollono for the screen. Pollono portrays Frank, a guy who runs the repair shop of the title. He has two pals (Shea Whigham and John Bernthal). For a while, it looks as if Small Engine Repair is going to be another evening with the bros, guys who often jockey to see who can be grosser. Pals for a long time, the men argue in a bar and stop talking. The story then leaps ahead to a night when Frank invites his estranged buddies to the repair shop for an evening of reconciliation. Another study in toxic masculinity, Small Engine Repair features performances by Jordana Spiro (as Frank's ex-wife) and Ciara Brava (as Frank's college-age daughter). The movie begins to shift gears when a college kid (Spencer House) shows up at Frank's shop and Pollono's screenplay begins to raise serious issues involving privacy, internet abuse, class conflict, and revenge. None of these themes are fleshed out enough to compensate for flashbacks of variable power and an ending that seems contrived to take some of the sting out of the meanness that precedes it. And in a movie focused largely on "the guys,'' Spiro has the movie's most commanding moment.
Starling 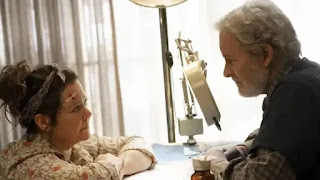 Starling, a movie about a husband and wife (Melissa McCarthy and Chris O'Dowd) attempting to cope with the loss of an infant daughter, casts Kevin Kline as a veterinarian who once was a prominent psychiatrist. The oddball combo of carers is indicative of something about the movie: Director Theodore Melfi mixes what seem like mismatched elements in a movie that makes a powerful subject seem almost banal. Burdened by sentiment, the movie derives its title from a bird that pesters McCarthy's character as she tries to garden. The screenplay by Matt Harris uses the bird -- a starling, of course -- as a metaphor for nest building and even, at one point, has McCarthy's Lily trying to nurse the pesky  bird back to health after she hits it with a stone. The movie mistakenly separates Lily and her husband Jack, who's in a mental institution after the loss of the child, which means we never really see them trying to work out their issues. No point in faulting the performances, but Starling is a wounded bird of a movie that just doesn't fly.
Posted by Robert Denerstein at 4:10 AM