A wobbly mixture of horror and comedy 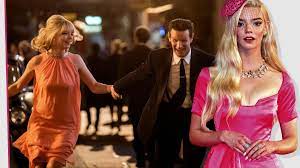 If director Edgar Wright were a painter, his palette would be a riotous blur of colors, one bleeding into another.
Just that kind of dizzying impact may have been what Wright was aiming for with Last Night in Soho, a mixture of horror and thriller tropes that alternates between contemporary Soho and the district during the 1960s.
I called Last Night a horror film, but that’s not quite accurate. Although it spouts a fair share of blood, the movie also has a bouncy spirit that goes against the horror grain. It's upbeat horror.

The story follows Eloise (Thomasin McKenzie) from the country to London where she hopes to prepare herself for a career as a fashion designer.  Obsessed with the 1960s, Eloise enrolls in a school where the students seem to be moving at a faster social pace than the one to which she's accustomed.

She should have known. Her grandmother (Rita Tushingham) already warned her about London's ability to swallow and destroy a naive young person.

In an effort to escape the hard-partying atmosphere of her dormitory, Eloise rents a room in a house run by a landlady (Diana Rigg) who may be up to more than we expect.

Once ensconced in her new digs, Eloise begins to dream of life in Soho during the swinging Sixties.

If this is a dream, it vividly transports Eloise back to the time that long has fascinated her and gives the movie one more twist, this one involving time travel.

In its '60s segments, Eloise begins to follow the life of Sandie (Anya Taylor-Joy), a young woman who hopes to establish herself as a singer in London's fabled West End.

The line between Eloise and Sandie begins to blur and the movie then contrives to teach Eloise that there’s more to the ‘60s than music and fashion. The ‘60s devoured dreams and dreamers, even slashed them to death.

To achieve its cautionary goals, the story introduces a slick Londoner (Matt Smith) who promises to help Sandie achieve stardom. Let's just say he's not true to his word.

Meanwhile back in the present, a fellow student (Michael Ajao) sees that Eloise is troubled. He tries his best to help but has no real grasp of the fact that Eloise's life includes increasingly harrowing trips to the 1960s.

Terence Stamp drifts through the proceedings, a brooding threatening presence.

A slick stylist, Wright (Baby Driver) has made a movie that eventually fails to be either amusing or frightening enough to save itself from being a muddled mashup that doesn't always track.

And exactly what's at the heart of Wright's metaphorical assault on the '60s? Most likely it's youthful naïveté, low-hanging fruit that's too ripe for the picking.

If you lived through the ‘60s, you may want to push aside the horror and attempted social commentary and simply enjoy the memories evoked by the movie’s soundtrack.

Although there’s another danger here, as well. You may find Peter and Gordon’s A World Without Love running uncontrollably through your head.

Peter and Gordon? If you don't already know, don't ask.