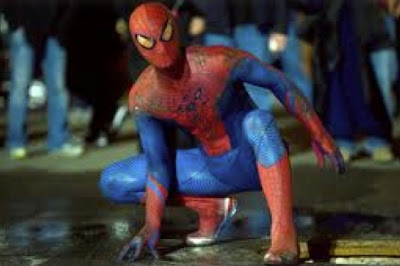 A moody teen-ager is bitten by a spider that's been subjected to genetic enhancement. After the bite, the young man begins to develop strange powers. Suddenly, he's stronger than he should be. Streams of silken material shoot from the palms of his hands, further boosting his powers by allowing him to swing from high places or to leap from tall buildings without hitting the ground. It's as if he's able to make his own bungee cords.

A simple spider bite leads to a momentous destiny: The young man makes the transition from Peter Parker of Queens, N.Y., to Spider-Man.

Because most moviegoers and Marvel Comics fans already know all this, you may be asking yourself why we needed another movie to tell us how Spider-Man began his crime-fighting career, a movie that covers old ground rather than one that continues where the Spider-Man series left off in 2007.

Within the first few minutes of The Amazing Spider-Man, you may forget such questions, and realize that you're enjoying visiting familiar turf, this time with new faces and with a different sensibility than the one director Sam Raimi brought to the Spider-Man movies, a sensibility that's both edgier and a bit more complex.

The Amazing Spider-Man remains a comic-book movie, but in the hands of director Mark Webb, who's making the leap from a small independent film (500 Days of Summer) to a summer blockbuster, Spider-Man receives new life, something that might have been impossible with a movie called Spider-Man 4.

I saw The Amazing Spider-Man in Imax and 3D. But what I most liked about this version had little to do with the movie's extravagant effects or with watching Spidey leap from one Manhattan skyscraper to the next.

For me, the fun of this new edition of Spider-Man involved the way Webb and the movie's writers stake out their own turf, tweaking the characters to give them a different feel and adding more emotional complications.

Essentially, this edition of Spider-Man is like two movies in one. The first is a pure origins story in which Peter Parker acquires his superpowers. The second story gives Spider-Man his first real challenge, pitting him against The Lizard, a mutant creature derived from an experiment by a brilliant, one-armed scientist (Rhys Ifans) who has been working on something called cross-spieces genetics.

Events in the first part of the movie should serve as touchstones for most viewers. While he's still a boy, Parker loses his parents when -- for mysterious reasons -- they're forced to flee their New York home. Young Parker is left in the care of his aunt (Sally Field) and uncle (Martin Sheen).

When Parker enters high school, Andrew Garfield (The Social Network) takes over the role. The 28-year-old Garfield might be credible in grad school, but never looks as if he belongs in high school.

Webb does a good jog guiding Garfield through the awkward transition from Peter Parker to Spider-Man, even if he's a bit repetitive in showing us how Parker learns to use his superpowers. An early scene in which Peter's powers get the best of him on a subway car is one of the movie's most creative.

I'm giving nothing away to tell you that Uncle Ben is killed by a fleeing felon, leaving Peter to develop on his own while Field's Aunt May frets about the fact that her nephew frequently arrives home looking much the worse for wear. Spider-Man is not immune from taking his lumps.

Garfield makes an edgier Spider-Man than his predecessor, Tobey Maguire, and he also suggests more complexity as he nurtures his crush on Gwen (Emma Stone), a whip-smart fellow student at a Queens high school. Gwen's father (Denis Leary) happens to be a New York City top cop who takes some convincing that a lizard-like monster is terrorizing Manhattan.

When it came to the monster portion of the movie, I was a bit skeptical myself. I didn't find The Lizard all that impressive, and a protracted action-oriented finale needlessly extends the movie's length.

But Garfield and Stone give Spider-Man a credible emotional life that fits with Peter's longing for his absent father, and in its overall impact, Spider-Man more the passes summer movie muster.

Here's hoping, though, that the next episode gets Peter out of high school and into a milieu where Garfield not only will be able to act the part, but to look it, as well, especially when he's not wearing Spidey's trademark mask.


Posted by Robert Denerstein at 11:30 AM