A piercing look at Russian life

If you're interested in art and cinema, director Andrei Zvyagintsev is a name you should know. 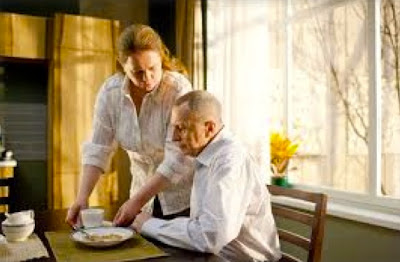 Elena, a new movie from Russian director Andrei Zvyagintsev, had me from the first shot. We're looking at an upscale apartment building in the gray light of dawn. The shot focuses our attention on one apartment, seen through leafless branches. A hawk, half hidden in shadows, can be seen on the right side of the frame. Eventually, another bird flies into the shot. Almost reluctantly, the sun begins to rise.

The shot is held for what seems a ridiculously long time, leaving us to wonder exactly how Zvyagintsev wants us to respond. No music sets a mood. We're on our own.

Zvyagintsev then takes us inside the modern, tastefully decorated apartment, where we meet Elena, played by Nadezhda Markina. Elena wakes up, gets out of bed and begins a morning routine that she's probably done hundreds of times before. As part of her morning ritual, she pads into another bedroom, opens the drapes and awakens a man.

We later learn that the man who occupies this separate bedroom is Vladimir (Andrey Smirnov), Elena's husband of two years, a matter-of-fact fellow who retired from an unnamed profession with a fair amount of money and an authoritarian sense of himself.

Zvyagintsev masterfully teases us, slowly disclosing details of Elena's life, snippets of information that paint a portrait of a woman whose devotion to her family (from a previous marriage) drives her to an act that's best discovered in a theater.

Zvyagintsev, a director who made a splash on the international circuit with 2003's The Return, gives his movie a noirish twist, but before the picture is done, he exposes us to a contemporary Russia in which the genetics of doom have long escaped the social test tube. Some accumulate wealth; others live marginally.

Elena's son Sergey (Aleksey Rozin) finds himself among the latter group. Sergey has a wife, two children and no job. He relies on his mother -- who collects a pension from her career as a nurse -- to support him. He also hopes that his mother's well-heeled husband will send his oldest son to college, apparently the only way the young man can avoid the army. But from what we see of this shiftless teen-ager, his future might be even less promising than that of his father.

Katya (Yelena Lyadova), the daughter Elena's wealthy husband, becomes a key character in the movie's dramatic landscape. Zvyagintsev leaves us to fill in a backstory about Katya, but turns this embittered young woman into the movie's most witheringly cynical voice.

When visiting her father in the hospital after he's had a heart attack, Katya makes it clear that she has little interest in his money. She has a grudging love for her father, but tells him she won't have children because she doesn't want to pass on the seeds of despair and futility that she sees as endemic to the human experience. It's part pose and part serious statement, the view from another character who can't imagine the future.

To the extent that Zvyagintsev encourages us to generalize, he presents a picture of Russian society that's extraordinarily bleak. Though obviously comfortable, Vladimir's apartment feels sterile, the triumph of taste over conviction. By way of contrast, Elena's son lives in cramped quarters on the outskirts of the city in a building near several nuclear reactors.

Zvyagintsev -- and his fine cast -- tell a story, but they're also delivering a quietly scathing critique of Russian life, exposing us to a society in which even Elena's stalwart qualities -- her broad-faced strength and dogged persistence -- don't always seem like virtues. In another era, Elena could have been the face on a triumphalist Soviet poster extolling the virtues of hard work. In an amoral, rudderless society, we're not sure where she fits in.

Elena isn't quite up to the standard set in The Return, but the movie encourages probing thought as well as reaction. Elena is marked by Zvyagintsev's unrelenting honesty and by his refusal to allow his finely wrought movie to join the ranks of what we might call "the cinema of reassurance." Elena cuts deep.

Posted by Robert Denerstein at 11:11 AM