The stormy life of a six-year-old 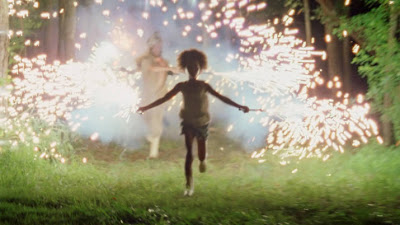 The primal imagery of Beasts of the Southern Wild can leave you shaken -- partly because of the film's fable-like rawness and partly because first-time director Benh Zeitlin strives for (and sometimes achieves) a near-visionary quality.

Using a non-professional cast and adhering to a folk tale-structure, Zeitlin has made a movie that has become -- with some justification -- the darling of this year's crop of indies, so much so that nothing is likely to surpass the wave of critical enthusiasm that washed over Zeitlin's Louisiana-based opus.

Fair to say that Zeitlin, who works with a filmmaking collective called Court 13, brings a fresh eye to the Isle of de Jean Charles, where the movie was shot and which has been turned into a fictional site called The Bathtub, maybe because tropical storms fill it with water and because it has a levee on one side and the Gulf of Mexico on the other.

Zeitlin works hard to load the movie with regional flavor, yet his imagery can push the story into a near-mythic realm. This odd mixture of specificity and timelessness gives Beasts a feeling of exoticism befitting its immersion in a part of the country that will feel unfamiliar to most audiences.

The story centers on six-year-old Hushpuppy (Quvenzhane Wallis), a girl who lives with Wink (Dwight Henry), her rough-edged father. Although the movie ultimately provides a rationale for the way that Wink treats Hushpuppy, his behavior sometimes seems abusive.

Hushpuppy sleeps in a different ramshackle facility than her father: He's constantly pushing her toward what he regards as the independence she's going to need to survive in a place where lethal storms constantly loom. Fable or no, I found Wink off-putting -- at least initially.

It's tempting to say that Wallis gives the movie its heart, but it's not exactly heart that she conveys; it's more about her nearly preternatural strength. Considering what happens in the movie -- a terrible hurricane which evokes memories of Katrina -- Hushpuppy will need every bit of fortitude she can muster.

Zeitlin doesn't attempt to conceal his concern for the environment: He shows images of the melting polar ice caps and also includes shots of wild beasts -- they're called aurochs -- which suggest that The Bathtub (and perhaps by extension, the planet) is under siege by rebellious natural forces that have grown tired of being abused.

In this instance, nature's vengeance, if that's what it is, is directed at folks who are the least guilty of defiling their environment. Folks in The Bathtub make use of the detritus and junk of a larger society with which they have only limited contact.

Because of the performances of Wallis, Henry and other locals, Beasts stands as a testimony to American idiosyncracy, as well as to the kind of close-knit communities that can develop among those who live outside the mainstream.

When it counts, the residents of The Bathtub pull together to help one another survive, and even in the face of adversity, they're surprisingly good-spirited.

I can't say that Beasts makes total sense, but it takes us places that we haven't been before and boasts some of the year's wildest imagery thanks in part to Zeitlin's commitment to Hushpuppy's point of view. Beasts of the Southern Wild may not be a mini-masterpiece, but it makes you hope that the talented Zeitlin, who's only 29, will continue to push the boundaries of cinema in ways that we can't yet imagine.