She's unsure what she wants

Can a marriage crumble gently? Sarah Polley's Take This Waltz suggests the answer is "yes." 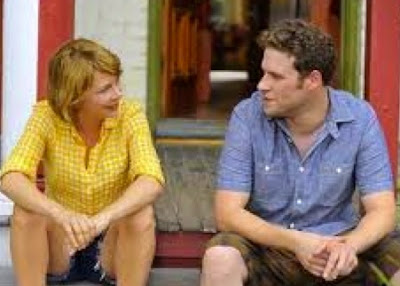 Take This Waltz -- a new movie from director Sarah Polley -- hits, misses and sometimes seems to be searching for a point as it follows the emotionally inconclusive life of Margot (Michelle Williams), a woman who's slipping into the final stages of a crumbling marriage. Although there are good scenes in Take This Waltz, which Polley also wrote, the movie doesn't amount to as much as you might hope, particularly considering that Polley's debut feature -- Away From Her -- was a restrained and quietly moving story about a couple dealing with the onset of the wife's Alzheimer's. The story in Take This Waltz is driven by Margot's long and not always intriguing flirtation with one of her neighbors (Luke Kirby). Kirby's Daniel is an artist who supports himself by pulling a rickshaw around Toronto. Very quaint. Margot's husband Lou (a surprisingly credible Seth Rogen) spends most of his time experimenting in the couple's kitchen. He's writing a cookbook about the many ways in which chicken can be prepared. Polley may have wanted to bring Margot to a point at which she's able to free herself from both the intoxicating pull of new romance and loyalty to her husband of five years. At times, it feels as if Polley drops story obligations to say something that she thinks needs addressing. A nude shower scene at a local pool, for example, seems calculated to show how women's bodies look when they're not being portrayed from an erotically charged male perspective. And in what amounts to a reach, Polley casts comic Sarah Silverman as Lou's sister; Silverman proves interesting enough as a recovering alcoholic who's as acerbic as she is self-aware. Nothing about Take This Waltz made me less respectful of Polley's talent. She's a nervy director who's willing to take chances, and she shows a real flair for casual interaction. I liked what I liked about Take This Waltz, ignored the rest and look forward to seeing where Polley, still best known as an actress, goes next.


Posted by Robert Denerstein at 3:00 PM