An American kid in Heidelberg 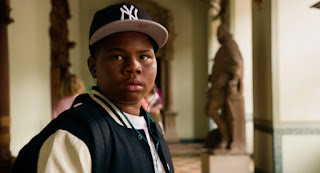 Adolescence inevitably seems to immerse young people in alien territory in which they can feel awkward, uncertain and confused.

In Morris From America, the ordinary problems of a dawning adolescence are amplified in ways that make for an illuminating movie with plenty of heart. Morris (a winning Markees Christmas), you see, is a black American kid living in Heidelberg, Germany, with his widowed father (Craig Robinson). Dad works as a coach with the local professional soccer team.

So what's life like for a 13-year-old who'd rather be back in the States?

Well, the kids at a local recreation center keep asking Morris whether he's a rapper or a basketball player? When drugs turn up at the center, a counselor immediately and wrongly accuses Morris. Even a 15-year-old (Lina Keller) who seems to accept Morris as a friend can't resist playing a cruel joke on him at a party.

Put another way, Morris faces racism that derives from stereotypes that have little to do with anything in his reality.

To make a movie such as this, director Chad Hartigan had to find just the right kid to play Morris. Chunky and reticent, Christmas gives a performance to which we slowly warm. By the end, he has entirely won us over as a young man forced to play the role of the stranger.

Much of the time Morris is on his own. He meets with the young woman (Carla Juri) who has been hired to tutor him in German or tries to stave off loneliness. He attempts to deal with a misguided crush on Keller's Katrin, who has an older boyfriend and who runs on a faster track than Morris can handle.

The heart of the movie beats around a father-son relationship. Familiar from such comedies as Hot Tub Time Machine, Pineapple Express and This Is The End, Robinson portrays a loving father who battles his own loneliness. He alternates between seeing his son as a companion and peer and as a kid who needs an authority figure in his life.

Robinson plays this character with a level of honest awareness that seems as real as the defenses Morris has developed to cope with this alien world.

As directed by Hartigan (This Is Martin Bonner), Morris From America becomes a sweet and knowing movie about a kid who must learn how to navigate a foreign society -- even if he'll never fully accept that society or be accepted by it.