She's back -- and she's pregnant

Renee Zellweger reprises her role as Bridget Jones. The results are decidedly mixed. 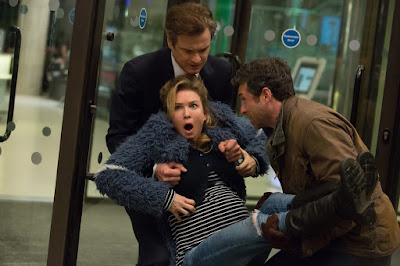 I don't know about you, but I haven't breathlessly been awaiting another Bridget Jones movie, although I have missed Renee Zellweger's presence on the big screen. Zellweger hasn't appeared in a movie in six years.

I suppose it was inevitable that Zellweger would return to movie action by reprising her role as a British woman who first stole hearts in 2001's Bridget Jones's Diary (good) and followed with 2004's Bridget Jones, The Edge of Reason (not so wonderful).

These days, Bridget works as a TV news producer. Even with an established career, she's still wondering whether her life ever totally will jell. On the night of her 43rd birthday, she ponders the question in her apartment -- alone and in PJs.

The movie quickly introduces the men in Bridget's life: two of them.

As a reluctant attendee at a music festival, Bridget meets Jack (Patrick Dempsey), a billionaire who has made his fortune in the computer-dating business. For Jack, romance can be reducible to algorithms.

Bridget also reacquaints herself with the charmingly diffident Mark Darcy (Colin Firth), one of her flames from the first two movies.

Bridget sleeps with both men, becomes pregnant and then agonizes about which of her lovers might be the father of the expected child.

Director Sharon Maguire, who also directed the first movie, isn't working in subtle mode. Laughs are derived from bits such as the one in which Bridget falls face forward into the mud that has turned the outdoor musical festival into a swamp.

Lots of ink has been spilled about Zellweger's appearance. I won't spill any more, but this edition of Bridget Jones finds everyone looking a bit long in the tooth for a supposedly rollicking rom-com.

Perhaps because he was busy acting his age in Florence Foster Jenkins, Hugh Grant is absent from this edition -- although the screenplay finds ways in which to refer to his character.

Some of the comedy involving Bridget's job is border-line smart. She feeds questions to an on-air personality played by Sarah Solemani, a woman who takes a far more pragmatic approach to romance than Bridget.

And, yes, the movie finds ways to add a culminating spasm of physical comedy, the unavoidable scene in which Bridget's water breaks. She's hurried to the hospital in the company of both men in her life: They struggle to carry her crumpling body through the hospital's revolving door.

I probably should report that a largely female preview audience found the movie a good deal funnier than I did, but I also must confess to a deep lack of concern about whether Bridget Jones's Baby bombs or booms, except to fret that a whopping success just might breed more such strained efforts.