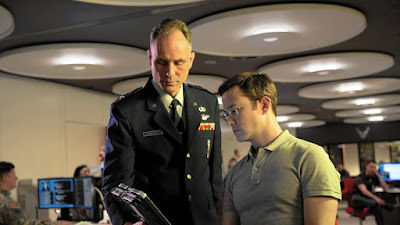 Oliver Stone's Snowden turns out to be a reasonably straightforward procedural about a young man who drank lots of patriotic Kool-Aid before learning that it gave him moral indigestion. We are, of course, talking about Edward Snowden, whose explosive 2013 leak of classified information exposed a mass NSA surveillance operation that included ordinary US citizens.

Now resident in Moscow, Snowden has become one more figure around which Americans can divide. Some view him as a hero who did his country a great public service. Others see him as a traitor.

By the end of Snowden, it's clear that Stone wants to place Snowden on the heroic side of the ledger, even including him in a final series of images.

Whatever you think of him, Snowden hardly projects the personality of a calculating villain intent on damaging his country, something we already learned from Citizenfour, director Laura Poitras's Academy Award winning documentary about how Snowden leaked his information to the press and, subsequently, to the world.

The talented Joseph Gordon-Levitt portrays Snowden as a one-and-done whistleblower; he captures Snowden's persistence and intelligence, and charts his course from an apparently conservative patriot to a man at odds with his own government.

In this version of the Snowden story, Zachary Quinto appears as single-minded Guardian reporter Glenn Greenwald; Tom Wilkinson breathes a bit more life into Ewan MacAskill, another Guardian journalist; and Mellisa Leo plays Poitras as a filmmaker who tries not to add to Snowden's already huge pile of problems.

For the most part, these characters remain underdeveloped, but Stone uses scenes in the Hong Kong hotel room where Snowden and the journalists were ensconced to punctuate a story that traces Snowden's development from a solider (he enlisted after 9/11, but was discharged after he both broke legs) to a rising star in the nation's intelligence apparatus.

Rhys Ifans brings suggestions of evil to the role of Corbin O'Brain, a fictional CIA character who hires Snowden. The young man's intelligence impresses O'Brain, partly because hje believes that the future of warfare isn't on battlefields but in rooms full of tech wizards who know how to hack and protect data.

A teleconferencing scene in which O'Brain confronts Snowden about a violation of CIA rules finds O'Brain towering over the young man on a huge screen, and, I'm afraid, serves as an example of Stone's fondness for overstatement, which he mostly keeps in check here -- unless, of course, you believe there could be more sides to the Snowden story.

Nicolas Cage shows up as a jaded CIA cryptographer Snowden meets during his training; Cage's character later reappears to add an exclamation point of approval to Snowden's decision to fight the power.

Perhaps to keep Snowden from turning into a vaguely fictionalized version of Poitras's documentary, Stone focuses much attention on the relationship between Snowden and girlfriend Lindsay Mills (Shailene Woodley).

Stone captures the tension that ripples through a relationship in which one of the partners (Snowden) never can talk about his day at the office.

The screenplay by Stone and Kieran Fitzgerald sometimes resorts to position-paper dialogue, and the movie lacks the dense intrigue of Stone's JFK or the undertow of rank corruption that filtered through Stone's Nixon.

I suppose that's another way of saying that a certain thinness keeps Snowden from feeling like a major statement about the ways in which the government may have violated the Fourth Amendment of the Constitution, which protects individual privacy.

The story often benefits from Stone's ability to create momentum, but if Stone wanted to shake us to the core about the perils of a government that's using security as a pretext to widen its control over us, I don't know that he gets the job done.

Perhaps Snowden isn't an epic enough character around which to build a powerhouse drama. As Snowden himself might attest, it's the debate he hoped to foster that matters, not him.