A bus driver who writes poetry 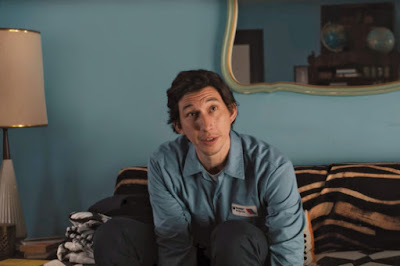 Jim Jarmusch's Paterson might be viewed as an attempt to connect with a frayed piece of a romanticized blue-collar past. Set in Paterson, N.J., and populated by a main character with the same name as the town, the movie walks in the shadow of some of the city's more renowned sons: Lou Costello, Allen Ginsberg and William Carlos Williams to name three.

On it surface, Paterson brings us into the life of a bus driver (Adam Driver) who writes poetry and whose live-in lover (Golshifteh Farahani) makes cupcakes, designs draperies and dreams of being a country singer.

Jarmusch takes us through a week in Paterson's life; at first, it may seem as if Paterson's art is not to be taken seriously, but it grows as the movie progresses in typical Jarmusch deadpan fashion, part meditation, part reverie, part fantasy portrait of a lumpen world where art lives without any trace of pretension.

Paterson is the kind of quiet movie in which a meeting between Paterson and a young poet (Sterling Jerins), proves stirring, an impromptu connection between artists. We also see Paterson driving his bus, listening to the conversations of passengers, two working men exchanging boastful stories about women or two kids talking about Halloween costumes.

Every night, Paterson takes his bulldog Marvin for a walk; he stops at the local bar for a beer and listens to the various travails of the customers, the most pointed of which is a story of scorned love. William Jackson Harper plays a man who doesn't seem to know how to take "no" for an answer.

Of course, the bartender (Barry Shabaka Henley) keeps pictures of some of Paterson's more famous residents on the wall behind the bar, his own hall of fame.

The movie gives both Paterson and Laura artistic lives; she dreams of having a Tammy Wynette brand of success. Her ambitions are cockeyed and outward. Paterson doesn't really seem to have dreams. He just does his thing, yet it's Paterson's poems that really seem to matter in the flow of things.

There's a sweet softness to Paterson, which -- I suppose -- can be taken as a near ode to the grace in ordinary lives, a grace that's disrupted when Paterson and Laura attend a movie, and Marvin eats most of Paterson's poetry notebook.

Has the art battle finally been lost?

Paterson probably is inconceivable without Driver, who adapts to Jarmusch's style with spectacular ease -- and without totally suppressing his personality. There's sincerity, but also a bit of wry irony to Paterson -- and that's all thanks to Driver.

The poems Paterson writes are the work of Ron Padgett, including an ode to Ohio Blue Tip matches. Early on, Paterson stops by the Great Falls, a Paterson landmark, to finish writing a poem. Jarmsuch superimposes images of the falls on Paterson as he sits and writes. Words of his poem appear on the screen. Perhaps the inexorable flow of water and the writing of a poem are really the same thing. Or maybe we're just watching a guy who's stopping for a quiet lunch.

After Paterson's notebook is lost, a Japanese visitor (Masatoshi Nagase) tries to bring a dejected Paterson back to his art. It may sound a bit trite, but every loss also opens a new blank page. Do we, the movie may be asking, have the courage to face the opportunity it presents?