He saw the future: It was hamburgers

Michael Keaton excels in The Founder, the story of how McDonald's became McDonald's. 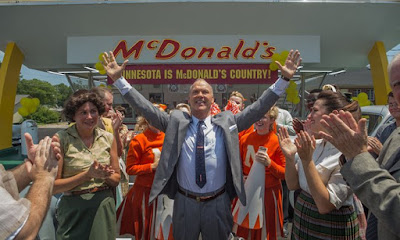 Everyone knows McDonald's, the ubiquitous hamburger chain. Not everyone knows the story behind one of America's -- and now the world's -- premiere fast-food operations. Founded in 1940 in San Bernardino, Ca. by the McDonald brothers (Mac and Dick), the restaurant revolutionized the drive-in food business by doing away with car hops and anything else that might slow the delivery of burger to customer. The McDonald's slogan: Buy 'em by the bag.

After some meager attempts at franchising, the brothers decided to focus on perfecting their formula.

But in 1954, Ray Kroc entered the brothers' lives. It was Kroc who grew McDonald's into a national phenomenon through an increasingly slick franchise operation.

According to the new movie, The Founder, the brothers were a couple of burger nerds who brought a high ethical standard to their work. Kroc ... well ... not so much.

In The Founder, Michael Keaton gives a terrific performance as Kroc, a man who always seems to be calculating the odds. Kroc doesn't just have ideas; he has bursts of inspiration, and he prides himself on his persistence, which he regards as more important than talent.

Keaton registers Kroc's thoughts with the quickness of a pin ball bouncing off bumpers; he makes Kroc a burger evangelist who understood that no ambition is too grand, and who eventually wrested control of the company from the brothers.

In some other era, an epiphany was something spiritual; as the '50s turned to the '60s, an epiphany shrunk in size. It was the light that dawned in Kroc's eyes when he first saw the San Bernadino McDonald's with its 15 cent hamburgers. You almost can hear Keaton thinking Kroc's thoughts: This, by God, is the future.

At one point, Kroc tells the McDonalds -- beautifully played by Nick Offerman and John Carroll Lynch -- that he envisions McDonald's as part of a small-town trinity: Church (with its cross); town hall (with its flag) and McDonald's with its patented Golden Arches serving as a bridge between the secular and the holy.

Lively direction by John Lee Hancock takes us from Kroc's days selling milk-shake mixers to the peak of his corporate success, which -- of course -- left the McDonald brothers bobbing helplessly in its potent wake.

Hancock (The Blind Side, Saving Mr. Banks) understands that few of us go to movies for moral lessons, so he makes sure to entertain. A sequence in which the McDonald brothers perfect their fast-food assembly line by drawing various positions in the McDonald's food chain on a tennis court becomes exactly what one of the brothers calls it, "a burger ballet."

As Kroc ascends the ladder built by his dreams, his ruthlessness becomes clearer; he sheds his first wife (Laura Dern). Before that he meets the woman (Linda Cardellini) who'll become his next wife. Gradually, he grows into the image he has created for himself, and it's exciting to watch Keaton expand Kroc's ego to match his achievements.

In a powerful scene toward the movie's end, Kroc explains to the exasperated Dick McDonald that the thing he most wanted to appropriate from the brothers was their name. He figured McDonald had an all-American ring that forever would elude a man named Kroc. He wound up taking not only their burgers, but their identity.

I can't say that Hancock, working from a screenplay by Robert D. Siegel, has made the Citizen Kane of fast food, but he's made an entertaining movie with enough substance to give you pause.

Let me summarize with something that may sound familiar in these days of ascending Trumpism:
The McDonald brothers were about burgers; Kroc -- in what probably could have been an even tougher movie -- was about being hailed as a conqueror.