A monster calls, a boy listens

A 12-year-old struggles with the looming death of his mother. 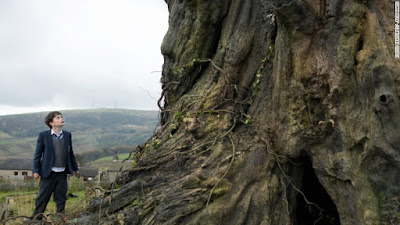 Few movies deal with what happens when a child must confront the death of a loved one. Fair to say, then, that A Monster Calls musters considerable courage in taking on a difficult subject by telling the story of Conor (Lewis MacDougall), a 12-year-old boy who's losing his mother (Felicity Jones) to cancer.

Adapted from a YA novel by Patrick Ness, who based his story on an idea by Siobhan Dowd, another YA novelist who really did die of cancer, A Monster Calls plumbs young Conor's imagination by introducing him to a tree monster (voiced by Liam Neeson) who guides the boy through what may turn out to be the worst period of his life.

The monster follows a tough love approach, reinforced by Neeson's fine voice performance. The monster doesn't coddle Conor, but informs him that he'll be told three stories (beautifully animated set pieces within the movie) before learning the most important truth pertaining to his situation.

Conor isn't entirely captivated by the stories, which the monster concludes with some observations that probably are too directly expressed: People occupy various places on the moral spectrum at various times; few are entirely good or irredeemably bad; sometimes bad deeds have positive outcomes.

Aside from his mother's condition, Conor has other worries. He's bullied at school, and he dreads the prospect of living with his stern grandmother (Sigourney Weaver) after his mother dies. Conor's dad (Toby Kebbell) has moved to America, and has started a new family.

Director J.A. Bayona does a fine job mixing the movie's live action, animation and effects-driven scenes, so much so that the movie's somber mood may remind you of something that another Spanish director (Guillermo del Toro) might have rendered -- albeit in even more ominous fashion.

The performances are all good; it's particularly refreshing that MacDougall isn't a generically cute movie kid.

It's also touching that Conor and his mom are soulmates in the world of the imagination. Both have artistic inclinations. Perhaps that's how Conor learned to use his imagination both to cope with and escape from a situation he doesn't want to face.

I could go on, but let me say the most important thing: The movie put a lump in my throat, even as I wondered whether adults will want to see what can be construed as a kids' movie -- even if it really isn't a kids' movie of standard-issue variety. It's possible that A Monster Calls is more a movie about a kid than a movie for kids, particularly younger ones.

And some of the scenes may challenge parents to do some explaining, notably one in which a furious Conor destroys his grandmother's living room, an instance in which Conor vents his darker impulses.

Despite such cautions, Bayona and company have managed to make a movie that doesn't shrink from a difficult subject. Good for them -- and good for those viewers willing to give it a try.

After all, it's worth remembering that not everything that happens in childhood qualifies as kid stuff.