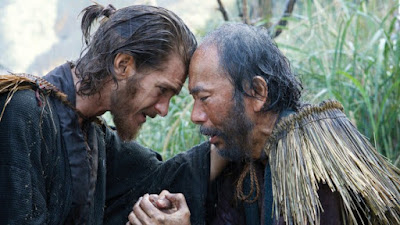 If director Martin Scorsese chooses to grapple with questions of doubt and faith, he should at minimum be commended for the singularity and intensity of an interest that seems to have marked much of his cinematic career, perhaps his entire life.

So it's no surprise that after 30 years of trying, Scorsese finally has taken a crack at the Japanese novel Silence in what some are calling the third in his trilogy of overtly "religious" films. The first two being The Last Temptation of Christ and Kundun.

Written by Jay Cocks and Scorsese, the movie takes place in 17th century Japan at time when the country is being purged of its burgeoning Catholic population. The Japanese authorities are intent on staving off this first salvo of encroachment from the West.

Working from a 1966 novel by Shusaku Endo, Cocks and Scorsese create a grim world of suffering. The Japanese use a mixture of rigorously polite cajoling and brutal torture to persuade Christians to renounce their faith.

The most common form of renunciation involves stepping on a bronze tile or fumie that has been engraved with a religious image, thus marking an outward and incontrovertible sign of rejection of an abhorred western theology.

Silence weaves a story around its many torture sequences. Two Portuguese Jesuits (Andrew Garfield and Adam Driver) sneak into Japan to find their mentor Cristovao Ferreira (Liam Neeson). They can't believe what they've been told: Ferreira has renounced his faith and taken a Japanese wife. He lives contentedly in Nagasaki.

Before they leave for Japan, their superior (Ciaran Hinds) warns the two priests that Catholics are being tortured and killed in Japan. He cautions them against what surely will be a life-threatening journey, but they insist on proving that their mentor didn't betray his faith, a task that's doubly important for them because they took their faith cues from Ferreira.

Visually, Garfield and Driver couldn't be more different. Looking increasingly Christ-like or at least like a movie version of Christ, Garfield's Rodriguez has doubts, expressed by his inner voice and prayers. His experiences in Japan test his faith, and he posses the questions that are supposed to drive the movie.

These questions are stated -- often whispered by Garfield as queries about why God doesn't seem to hear the cries of the suffering faithful -- but they don't animate the movie or give it a sense of urgent, necessary life. Some of that may result from Garfield's inability to penetrate the depths of Rodriguez's tortured soul.

Driver, who's less seen because the two priests eventually split up, is an unusual looking actor, but here, he's been given the face of a gargoyle, otherworldly and strange.

Now, when it comes to torture, the Japanese are portrayed as adept and serious. They drip boiling water on bare flesh; they tie people to ocean-side posts and let them drown as the tide crashes in; they behead people; and they wrap people in straw and set them on fire. As a kind of piece de resistance, Christians are hanged upside down, their heads stuffed into holes in the dirt. Small incisions are made on their necks so that their blood slowly drains out of them.

The Japanese characters are strangely problematic, sometimes cartoonish. The Inquisitor who engineers all this torture (Issey Ogata) has a caricatured look. I've seen Ogata's performance described as comic. It's certainly weird and unexpected.

At one point, he hears disconcerting news and his body nearly deflates, something in the manner of air released from a balloon. Very strange.

Yosuke Kubozuka plays Kitchijiro, a self-confessed sinner who sometimes guides the priests and who has become something of an expert on what it means to renounce one's faith. He's a repeat offender.

Oddly, the movie lacks an exalting climax. I can't say more about this without revealing what should be discovered in a theater, but I'll also say that the issues Scorsese takes from Endo aren't general issues of faith in the face of terrible suffering, but issues pertinent to Catholic ideas about faith, martyrdom and apostasy as Endo (and subsequently Scorsese) interpret them.

Torture, of course, is an obviously condemnable form of coercion and watching it is appropriately appalling, but I don't know why we should be more interested in this particular part of Japanese history than we are, say, in the Spanish Inquisition that preceded it by several centuries.

Still, this is where Scorsese has landed to make a film that has been bracingly shot by cinematographer Rodrigo Preieto, whose images have staying power and depth.

It's not easy to reach a solid conclusion about Silence. As intellectually fraught as the movie can be, it also can be boring and stilted. At 161 minutes, it may seem nearly interminable to those who aren't caught in its sway.

For a movie that seems to want to explore questions about the nature and obligations of faith, Silence feels as if it has veered off into an exotic and foreign territory from which it has excavated a story full of gruesome sights and narrowly focused preoccupations.

Like the character Garfield plays, Silence too often feels like it's living in a world of its own and talking mostly to itself.