Woody Allen's latest sinks toward the bottom of the director's large filmography. 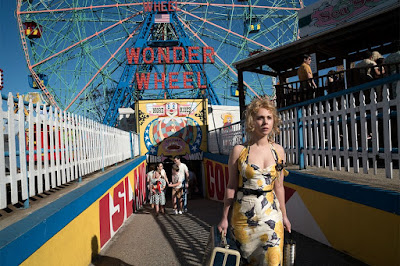 At times, Woody Allen's Wonder Wheel feels more like a play than a movie -- and not a very good play at that, something along the lines of cut-rate Eugene O'Neill.

As with most Allen movies, a nicely composed surface masks the paucity of the drama. Put another way, the peripherals are top notch. Vittorio Storaro's cinematography and Santo Loquasto's production design skillfully blend beauty and nostalgia in creating the world of Coney Island during the 1950s. Visual competence goes only so far, and the overall effect of Wonder Wheel tracks toward abiding unpleasantness.

Allen breaks little new ground as he tackles familiar themes in this aggressively retro setting: love, betrayal and the way sexual desire and love can blur, creating uncomfortable emotional smudges for all involved.

If you want to spend time wondering how all this relates to Allen's well-publicized private life, have it. But taken on its own terms, the movie represents a misbegotten journey into a lower-class hell of the 1950s. The movie feels strained, artificial and tawdry.

The arrival of Humpty's daughter (Juno Temple) from a previous marriage upsets Ginny's applecart, which isn't all that sturdy to being with. Humpty, a raging alcoholic who's no longer drinking, still manages to rage. He's Ralph Kramden without the laughs.

Juno's Carolina has been estranged from Humpty, but she fears reprisals from the mobster husband she's fleeing. Humpty warned his daughter against marrying a mob guy, but Carolina didn't listen. It doesn't take long for Humpty to crack; he loves Carolina too much permanently to reject her. Besides, she has no place else to turn.

All of these characters are penned up in a shack overlooking the Coney Island boardwalk, where Humpty operates the merry-go-round and Ginny works as a waitress in a clam house.

Allen sets us up for a kitchen sink drama that's intermittently narrated by a Coney Island lifeguard (Justin Timberlake), a dreamer. Timberlake's character aspires to be a playwright. He also starts an affair with Ginny, who once had acting ambitions and who imagines that she might find a better life with Timberlake's Mickey. She separates herself from reality by claiming that she's only "acting" the part of a waitress.

The actors are often stuck with dialogue that might better have suited Allen's contemporary New York characters, but, in this instance, turns them into labored fictional creations. Temple does her best to be young and flighty. The usually wonderful Winslet elbows her way into an unappealing version of a Blanch DuBois-scale unraveling. Timberlake does his best to portray an Army veteran who dropped out of NYU but doesn't take easily to the role. Belushi either pleads Humpty's case or bellows like a wounded ox.

I'd put Wonder Wheel near the bottom of Allen's abundant filmography. The story isn't very good and it leaves a bad aftertaste when it's done. I'd call that a double whammy of badness.