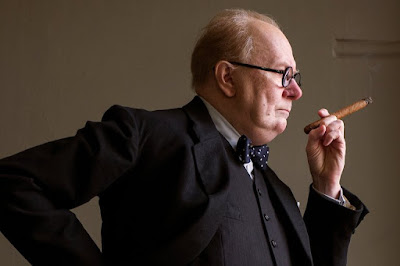 The most striking thing about Darkest Hour, the story of how Britain teetered on the edge of defeat in World War II but regained its moral resolve, involves Gary Oldman's make-up and performance as Winston Churchill. Although he seems the least likely of actors to tackle Churchill, Oldman and makeup artist Kazuhiro Tsuji pull off a near miracle. They give us a Churchill who's domineering, insecure and witty, but also a man sagging as the weight of decision falls on his shoulders.

There aren't many sure bets these days, but it seems certain that Oldman will be nominated for a best-actor Oscar for what he has done in a movie directed by Joe Wright (Pride and Prejudice and Anna Karenina).

Wright directs with a sure if somewhat heavy hand, underscoring the momentous nature of nearly everything that happens in Darkest Hour. The major question before Churchill and his war cabinet: Should Britain negotiate some sort of peace agreement with Herr Hitler, as Churchill refers to the Austrian paperhanger?

The alternative: battle until victorious or until the last British warrior falls.

We all know how the story turns out, but at its best, Darkest Hour -- which depicts some of the events leading up to the civilian evacuation of British soldiers from the beaches of Dunkirk -- reminds us that history only looks inevitable when viewed through a rearview mirror.

In 1940, it was by no means certain that Britain could withstand the German onslaught. The US had yet to enter the war, and Hitler's armies were toppling one European country after another.

Audiences that have seen Dunkirk already are prepped for Wright's movie, which recreates behind-the-scenes haggling among the anti-Churchill forces. Neville Chamberlain (Ronald Pickup), who Churchill replaced as Prime Minister, wanted to stave off destruction by negotiating with Hitler. Stephen Dillane appears as Viscount Halifax, a Chamberlain ally who was even more anxious to capitulate than his friend.

King George VI (in a fine, subtle performance from Ben Mendelsohn) had doubts about Churchill, whom he both feared and mistrusted -- at least during the early days of Churchill's Prime Ministership.

Some scenes are as hokey as Churchill is bombastic. Besieged by doubts late in the movie, Churchill takes a ride on the underground (supposedly his first ever) to mingle with the people, listen to their views and draw on their strength.

Of course, Churchill was a large man -- both physically and in importance. The movie is at its best when Oldman delivers important Churchill speeches ("We shall fight on the beaches, etc.") and when peppering his performance with Churchill's many peculiarities: He couldn't abide single-spaced typing, drank whiskey with his breakfast and throughout the day and seldom could be seen without a cigar.

So the verdict is mildly mixed. Darkest Hour isn't as great as the historical moment it depicts but Oldman's performance certainly rises to the occasion.