A summer romance in Italy 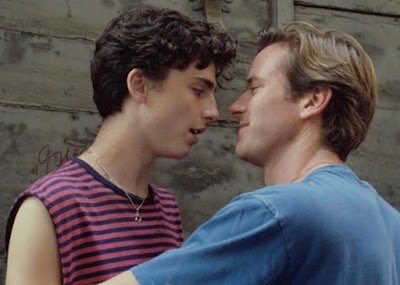 Call Me By Your Name -- the much-acclaimed movie from director Luca Guadagnino -- stands as a love story between a 24-year-old man and a 17-year-old young man who's just discovering his sexuality. The age difference has put some folks off, but if you see Call Me By Your Name, you'll understand that Guadagnino's work has little to do with sexual exploitation.

The movie has more to do with what happens between two characters during the languid and irresistibly pleasant summer of 1983. Set in the northern Italian town of Crema and the surrounding countryside, Call Me By Your Name is a movie marinated in sensual pleasures, not all of them having to do with sex.

When young Elio Perlman (Timothee Chalamet in a career-making performance) speaks of going swimming, he's talking about a plunge into summer and you almost feel the gentle embrace of the pond where Elio and his friends swim.

The movie's context adds interest, as well. Chalamet's Elio isn't some sad, isolated figure; he lives with his mother and his father (Amira Casar and Michael Stuhlbarg). Stuhlbarg's Professor Perlman studies classical sculpture, particularly Greek renditions of the idealized male body. Each summer, Professor Perlman invites a promising grad student to work with him, helping to catalog his research.

In the summer of 1983, Oliver (Armie Hammer) arrives to work with Perlman.

It's clear from the outset that Elio is taken with Oliver, something in the way that a young man might be taken with an older, more worldly and much more confident man. Perhaps sensing Elio's interest, Oliver reacts cautiously -- but he does react.

Working from a screenplay adapted by James Ivory from a novel by Andre Aciman, Guadagnino creates sensual scenes between Elio and Oliver and also makes it clear that Elio's hormones are raging. He has sex with a girl from town and satisfies himself with a juicy peach, a strange take on the TS Eliot line from the The Love Song of J. Alfred Prufrock: "Do I Dare to Eat A Peach."

Oliver and Elio spend their summer together, but it's also clear (at least to us) that Oliver will move on. He'll finish his internship, resume his life in the US and press the summer of 1983 into his book of distant memories.

Call Me By Your Name brims with warm-weather leisure: Elio plays classical piano, reads and sometimes hangs out with the local teen crowd. He also explains that his Jewish family believes in a kind of discreetly expressed Jewish identity. If the Perlman family belongs to any tribe, it's the tribe of international intellectuals.

The sex scenes between Elio and Oliver have been filmed as much to express sensitivity as desire, and it's Chalamet's performance as Elio that sets the tone.

Less well-defined, Oliver is a visitor in Elio's life and, in some ways, in the movie. You can see that as a flaw, but I assume that Guadagnino chose to present Oliver in this fashion. Despite being plenty smart, only Elio could have seen the relationship extending beyond the summer or maybe he had no real vision for it at all.

Although it doesn't occur until the end, a conversation between Professor Perlman and his son puts the story in context. Perlman's speech interprets the summer for Oliver from the perspective of an older and impressively tolerant man who understands that pleasure and pain exist on a continuum and that experiencing one means not shutting out the possibility of the other.

You may wish to think of Call Me By Your Name as life on vacation -- and that means that the movie is as lost in summer idyl as its characters. I suppose that qualifies as a weakness, but this self-contained world functions like a cocoon that protects all those in it.

Does that make Call Me By Your Name a fantasy? Maybe, but in Guadagnino's hands, it's an artfully constructed one.