A satire tries to give the art world its due

Velvet Buzzsaw aims at an easy target -- the commodification of art -- but the movie's cast produces enjoyable results. 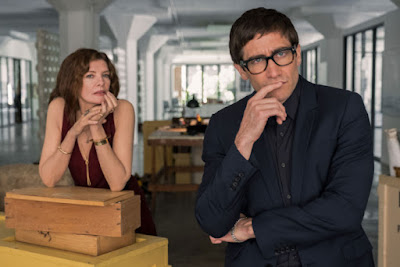 If you think that the Los Angeles art world is ripe for satire, director Dan Gilroy's Velvet Buzzsaw won't disappoint. It's not that Velvet Buzzsaw lands a mortal hit. How could it? It's based on an obvious conceit about the obscene invasion of major money into a corrupted art world. It may not be a thematic powerhouse, but Velvet Buzzsaw makes some dead-on observations. Better yet, its cast of characters -- some bordering on art-world caricatures -- proves consistently amusing.

Reunited with his Nightcrawler star Jake Gyllenhaal, Gilroy introduces flashes of horror into a story in which the characters are precisely and wickedly drawn. Gyllenhaal's Morf, for example, is an art critic who regards his taste as nothing less than definitive. He's also in tip-top shape, a devotee of Peloton and Pilates. Sporting bangs and glasses, Morf evidently is one of those critics who can make or break a career. He's bisexual and so taste-conscious that he feels no compunction about expressing his displeasure with at the color of the coffin at a gallerist's funeral.

Rhodora Haze (Renee Russo) runs a top-drawer Los Angeles gallery. Rhodora has a keen eye for money and an attitude of superiority that flirts with bitchery. Oh well, forget flirts. Russo, who also worked in Gilroy's Nightcrawler, takes her character all the way. It's a pleasure to watch her.

Zawe Ashton works for Rhodora who claims to be grooming her charge for better things. Toni Collette has a sharply funny turn as a museum curator turned art consultant. Rhodora's main competition arrives in the form of another dealer Tom Sturridge's Jon Dondon.

The movie pushes us into the art world with style and wit before introducing its plot. The story gathers steam when Ashton's Josephina discovers a dead body in her apartment building. She enters the apartment of the deceased and discovers a collection of paintings done by the dead man, an unknown artist named Vetril Dease. Some of Dease's portraits evoke terror and torment. All his paintings, even those with wholesome subjects, have an eerie aura.

Josephina shows Dease's work to Morf. He immediately confirms her sense that she's stumbled onto a trove of original and highly marketable work. Eyes light up because Dease evidently is the next big thing. Even better, he's dead: His body of work never will expand.

No one seems particularly shaken by the fact that Dease wanted all of his paintings destroyed. As the movie unfolds, we discover why. People start getting murdered in horror-movie fashion.

But the resolution is less important than the way that Gilroy uses the plot to bring the characters into money-grubbing conflict.

John Malkovich sounds an almost sane note in a small role as an art star whose reputation has begun to fade.

Gilroy's satirical eye extends to the various high-fashion art uniforms worn by a chic-conscious cast of characters: Trends rather than trenchancy dominate.

The pretensions of the art world make for an easy target and Gilroy's overall insight -- greed motivates the sale and purchase of art -- can't be called fresh. But he invents a movie full of characters that provide a fair measure of entertainment. I'd say that the cast members were having one hell of a good time, even if some of their characters are brutally (and often creatively) knocked off.

Posted by Robert Denerstein at 7:30 PM