'Miss Bala' is one big miss 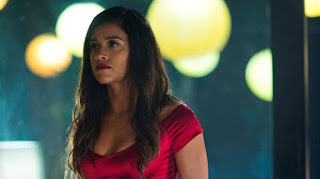 Miss Bala may have been intended to boost Gina Rodriguez's profile and shift the actress into an action gear. The star of TV's Jane the Virgin has appeared in other movies (Deepwater Horizon and Annihilation) but this time finds herself in the middle of a drug smuggling/gun-running/gangsta thriller that also happens to be a remake Spanish-language movie from 2011. This misguided outing must have lost something in translation, turning into a by-the-numbers thriller about a Los Angeles make-up artist (Rodriguez) who's drawn into the cross-border drug underworld. Hey, she's got good reason: She wants to save her Tijuana based friend Suzu (Christina Rodlo). In the process, Rodriguez's Gloria becomes entangled with the DEA and also begins to establish a relationship with Lino (Ismael Cruz Cordova), a vicious, self-justifying and apparently aspiring cartel czar. Lino says he can help find Gloria's friend, who disappeared during an early picture shootout at a Tijuana nightclub. Director Catherine Hardwicke (Thirteen and Twilight) doesn't skimp on violence but much of it is more jittery than compelling. Anthony Mackie turns up in a too-small role as someone involved in the drug chain into which Gloria is coerced. The movie careens from betrayal to betrayal as Gloria tries to find her footing in this merciless world. Eventually, she must pick up an AR-17 and resolve matters in the way of such movies. Miss Bala, in which a beauty pageant plays a fringe role, can't replicate the corruption-heavy vibe of a movie such as Sicario. It's improbably plotted and predictable, yes. In sum, though, it's just Corruption Lite and, by the end, laughable.