No mean streets in his New York 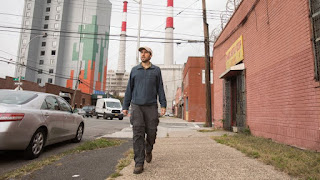 What's not to like? The World Before Your Feet is one of those documentaries that audiences tend to love -- and not without reason. The movie introduces us to Matt Green, a guy who decided to make it his life's mission to walk every block in New York City. That's a lot of walking, a lot of neighborhoods, and a lot of interesting minutia about the places visited during Green's 8,000-mile journey. Director Jeremy Workman wisely grabbed a camera and followed Green on some of his daily travels through the city's five boroughs. These include wooded areas on Staten Island, crowded streets in the South Bronx and history-steeped lower Manhattan, as well as a variety of New York City cemeteries. If you’ve been longing to know exactly where the city’s oldest tree can be found, Green will show you. (A hint: it resides in Queens.) A civil engineer by trade, Green quit his job and survives with help from friends and others, who allow him to stay in their apartments, sometimes in exchange for taking care of their cats. He says he spends $15 a day on transportation and food. That’s it. Green has turned himself into a set of eyes, photographing as he walks and blogging about the blocks that he traverses. Green walks freely and without problems; most folks he encounters appear to be curious and welcoming. Green's attitude contrasts with that of another city walker, Garnette Cadogan, who happens to be black. Unlike Green, Cadogan has to pay attention to how he's perceived lest he encounters hostility. The movie doesn't seem to follow any particular pattern as Workman tags along with Green, who seems undaunted in his efforts by weather. The idea of urban exploration remains fascinating but the real value of Green's project has less to do with what he learns about New York City than with its capacity to provide an inspirational boost to folks looking to surrender — if in less extreme ways — to ideas that interest them, quite apart from whether those ideas might interest anyone else or result in any monetary gain. Not a bad thought if you’re looking for New Year's resolutions that don’t require weight loss, additional exercise or, perhaps, the abandonment of favored vices. Happy New Year.

Email ThisBlogThis!Share to TwitterShare to FacebookShare to Pinterest
Labels: Jeremy Workman, Matt Green, The World Before Your Feet