The haunting power of teen love 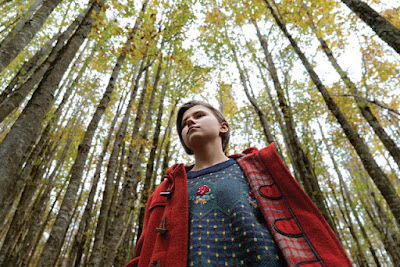 At the end of Sicilian Ghost Story, we learn that the movie we've been watching is based on a true story about a 14-year-old boy who was held hostage by mobsters in an effort to persuade his gangster father from ratting them out. The movie derives from the real-life story of Giuseppe Di Matteo, a boy who was kidnapped by the mafia in 1993 and imprisoned for two years. I won’t say more to avoid spoilers.

I mention this early on as a way of telling you that the movie may feel more detached and spectral to American audiences than it would to Italian audiences who already know the case. (I learned about the story's origins from a review in the Hollywood Reporter.)

But until its sobering end, Sicilian Ghost Story hardly feels like a riveting thriller about a kidnapped teenager. Directors Fabio Grassadonia and Antonio Piazza approach the story mostly through the eyes of Luna, an imaginative 14-year-old girl beautifully played by Julia Jedlikowska.

The story begins when Luna pursues her crush on the movie's Giuseppe (Gaetano Fernadez), a kid who comes from a more affluent background than she does. Giuseppe seems attracted to Luna, inviting her to his house to watch as he puts his jumping horse through its paces. The invitation seems to signal something more, perhaps an entre into Giuseppe's life and even his dreams -- forbidden turf in any case.

The story begins to shift into strange territory when Giuseppe suddenly stops attending school. Fearing Mafia reprisals, no one in the Sicilian village where the story takes place will speculate about what happened to the young man and Luna's visits to Giuseppe's home are met with icy rejection by Giuseppe's grandfather. His mother seems to have slipped into a madness born of desperation.

The movie then shows how Luna tries to project herself into the vanished Giuseppe's life. It also shows us how Giuseppe deteriorates in the hands of his captors, who keep him chained in a small room.

Luna's obsession consumes her: She begins to see herself as the savior who will rescue Giuseppe with whom she's had only the most casual of encounters. As most of us know -- either from experience or from movies -- teen love can be agonizingly powerful.

Fearful for Giuseppe, we want to believe in Luna's fantasies, which -- to her -- are so real that her mental health is called into question.

The movie sounds grim notes as it explores Luna's imaginative projections, which come across as a form of extreme magical thinking that’s reinforced by the directors’ eerily distorted images, striking compositions and atmospheric musical score.

This ghost story makes no attempt to scare us with cheap shocks. Instead, the movie insinuates itself with us, creating a tragic memory of an abused young man and the girl who believes her love is strong enough to save him.

Posted by Robert Denerstein at 11:10 PM