A celebration of a famed choreographer 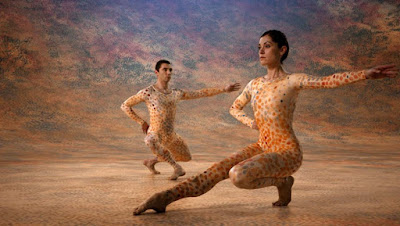 Criticism requires a broad range of literacy in a staggering variety of fields. Few critics cross enough lines to claim anything resembling super-literacy. I certainly don't. And most film critics seem to confine their cross-referential range to novels, television, popular culture, maybe theater and music, and, heaven help us, comic books. Of course, I'm referring only to the critics I know or those I read.

I begin this way in talking about Cunningham, a documentary about choreographer Merce Cunningham because I need to confess a woeful lack of knowledge about dance, modern or otherwise. Although Cunningham, who died at the age of 90 in 2009, was widely acknowledged as a choreographic genius, he is not in my pantheon of cultural icons. Blame my ignorance or cut me some slack because no one can be well-versed in everything.

So what do I have to say about Cunningham, a documentary about this acclaimed choreographer, his dances and his status in the art world? Take a look at the photograph displayed above this review. Dancers are poised against a background designed by painter Robert Rauschenberg. The photograph captures a moment from Cunningman's Summerspace and suggests an imagination rich in color, movement and dramatic suggestion. The picture makes you eager to see the moment that follows.

I've only seen Cunningham in 2D, but I was grateful to director Alla Kovgan for not making a straight-ahead documentary. (A 3D version has been shown in some markets, but is not available in Denver.)

Instead, Kovgan mixes archival material, snippets of interviews (including with Cunningham) and most important, portions of filmed segments from past companies juxtaposed with the work of contemporary dancers. The dances -- although seen only in pieces -- cover the years 1942 through 1972.

Cunningham evidently did not believe that people should dance to music but that movement should be its own art. Some of the movements, almost contortions, seem to require muscles tuned to impossible levels of endurance.

At the same time that Cunningham championed the purity of dance, much of his work was done in collaboration with cutting-edge contemporary visual artists and musicians, Andy Warhol and John Cage, to cite two examples. Importantly, Cunningham was at the epicenter of an especially fertile American art moment, a time when the walls separating one art from another were beginning to crack.

The contemporary versions of Cunningham's dances spread over a variety of settings: a Manhattan rooftop, a subway tunnel, a forest. One can only imagine the difficulties encountered by the movie's gifted director of photography, Mko Malkhasyan.

If you're well versed in Cunningham's work, I probably have nothing to tell you except that Cunningham displays as much visual imagination as the choreographer brought to dance. If you're less-informed about Cunningham, this documentary would make a good place to start catching up.