Kirsten Stewart races about in a thriller that can’t freshen a familiar formula. 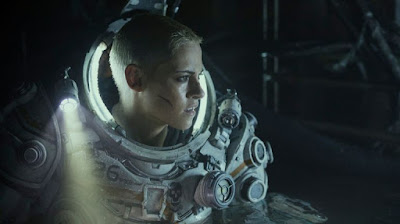 In this water-logged adventure, both characters and the camera grope to find legible images to support what apparently was intended as an exercise in breathtaking excitement.

You’ve probably read that Underwater is another Alien knockoff, a movie about a desperate crew that tries to survive the destruction of its deep-sea diving station and an attack by a monster, glimpsed mostly in quick cuts, but eventually revealed to have razor-sharp teeth. I’m waiting for a monster that torments its victims by gumming them to death.

Is the sea taking revenge for man’s insistence on exploiting its bountiful resources or is this an opportunity to see Kristen Stewart — her close-cropped hair, dyed blond — race about in her underwear, much as Sigourney Weaver did toward the end of Alien.

A knockoff? Maybe. But director William Eubank should have watched Alien more closely. Rather than building toward deadly encounters, he races through them, dulling any chance of providing tension that lives up to the movie’s pounding score.

Underwater demonstrates only minimal interest in characterization as the survivors of this deep-sea disaster pick their way through the rubble in hopes of reaching evacuation vehicles. We're left to wonder which members of this small group have a chance of surviving.

As you might expect, the script could have been written on the back of a napkin, but in this case, one that had been used to sop up a wine spill that made it seem as if all the story beats had run together.

To further burden the actors, they’re often asked to wear industrial-strength diving outfits that obscure their humanity and make them look as if they might have been at home in some misbegotten helping of 1950s sci/if.

Amid images so dimly lit, it’s not always easy to tell what we’re watching, we meet the crew members who accompany Stewart’s Norah on her survival quest. These include the outfit’s captain (Vincent Cassel) and the resident wise-ass (T.J. Miller), as well as another woman (Jessica Henwick) who also will scurry about in her underwear before the movie ends.

Employing an editing style that turns the movie’s images into a kind of visual shrapnel doesn’t help sustain interest. Massive amounts of CGI probably were required to create this underwater environment. The end result for me: a glub and a half.