A revenge saga that fails to kill 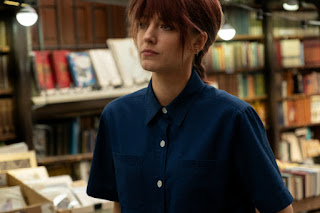 In a more reasonable world, there would be a national contest to determine whether anyone can find a way to care about the plot of The Rhythm Section, a senseless thriller about a woman who sets out to avenge the death of her family.

Blake Lively portrays Stephanie Patrick, a promising young woman who abandons her work at Oxford when she loses her parents and siblings in a plane crash. More than grief-stricken, Stephanie loses her moral bearings, sinking into a life of prostitution and heroin use.

As for Stephanie's family, they're not only killed in a plane crash, they're rendered lifeless in flashbacks that director Reed Morano uses to remind us of the familial bliss that Stephanie has lost.

Not to worry. A reporter (Keith Proctor) arrives at Stephanie's seedy digs to tell her that this was no normal plane crash, but one engineered by an Islamic terrorist.

What's a girl to do? In a sub-par movie such as Rhythm Section, she decides to take revenge, seeking out a former M16 agent (Jude Law) to help her learn the assassin's trade.

Killing is easy, Law's character says. The hard part? Living with it.

Adapted from a novel by Mark Burnell, who also wrote the screenplay, the movie plays as if it consists of little more than story beats cobbled together without much concern for either credibility or involvement.

Murky motivations substitute for intrigue when Stephanie goes to work for Marc Serra (Sterling K. Brown), an ex-CIA agent who wants her to hunt down the people involved in the bombing.

Stranded by a lifeless screenplay, Law had the good sense to hide behind a beard and look as grim as possible. Lively approaches a physical role by inserting streams of grunting realism into her many bruising fights.

Lest any base is left untouched, the movie travels to London, Tangier and Marseilles in search of excitement, including (what else?) a frenzied car chase.

Perhaps to add faux complexity, the screenplay finds Stephanie hemming and hawing about how much she wants to hone her skills. Is there any form of killing she won't try?

Efforts at nuance aside, Rhythm Section fails as either a satisfying helping of revenge or a drama about a female character kicking down the doors of a formerly male preserve. Does a franchise loom? That may have been the hope, but -- for my money -- Rhythm Section offers no reason we should want to see any of these characters again.