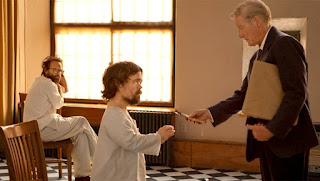 Three Christs focuses on a psychiatrist who in the 1950s studied three paranoid schizophrenics, each of whom believed that he was Jesus. Although Three Christs derives from a true story, the movie winds up feeling contrived and unconvincing. A miscast Richard Gere portrays Dr. Alan Stone, a psychiatrist who in the picture's early going arrives at a Michigan state hospital to conduct his study. Peter Dinklage, Walton Goggins and Bradley Whitford portray Dr. Stone’s patients, men who have convinced themselves that they are the true Christ. Stone isolates the trio of faux Christs from other patients to determine if they can get along with one another. Stone wonders: If one Jesus is confronted with another, would one of them have to admit that he's deluded. Everyone, of course, knows that the New Testament tells the story of a single Jesus. Director Jon Avnet needed a villain. The closest he comes is Dr. Orbis (Kevin Pollack), the psychiatrist who heads the hospital and who seems to value procedural correctness over sensitive treatment. Charlotte Hope plays Becky, the young woman who becomes Dr. Stone’s research assistant. Julianna Margulies appears as Stone’s wife, a character who adds little to the story. Of the three Christs, Dinklage gives the most interesting performance. Eloquent and nearly regal in bearing, his Canadian-born Joseph Cassel thinks that he should be sent to England. Tragedy looms as Avnet presents Stone as a man who sides with his patients in a way that the hospital establishment mostly mistrusts. He's adamant in his opposition to electroshock therapy, for example. Beneath all the drama, we find a romanticized notion about how the patients help to cure the doctor of his heretofore unacknowledged delusions. The point seems forced, a notion more accepted than discovered by a movie that flirts with intriguing issues but feels like it might have benefited from the intensifying claustrophobia of the stage.


The Song of Names 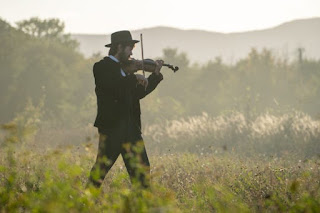 Based on a novel by classical music critic Norman Lebrecht, The Song of Names aims for high seriousness but fades from the screen without making the expected impact. The story centers on a gifted Jewish violinist who's played at various ages by Luke Doyle, Jonah Hauer-King and Clive Owen. Sent to England from Poland to escape the Nazis, young Dovidl is raised by an English family that goes to great lengths to respect his Jewish heritage. After a rocky start, the supremely confident Dovidl makes friends with Martin, the son of the man who agrees to shelter Dovidl while nurturing the youngster's musical talents. As the two age, Martin develops a belief in Dovidl and promotes his career. On the eve an important concert, the now-grown Dovidl vanishes. After 35 years, Martin (played as an adult by Tim Roth) tries to find his former friend. Director Francois Girard uses Dovidl's disappearance as a source of mystery while the movie shifts between the war and post-war years and the 1980s. Little catches fire with Dovidl's story becoming secondary to Martin's search. The result: A movie that tries to deal with the Holocaust, musical genius and personal transformation fails to plumb any of those areas with sufficient depth. The historical backdrop and the music provide a bit of elevation, but the movie strikes only a minor chord.