A strange and very unlikely relationship

The Painter and the Thief disturbs as much as it illuminates. 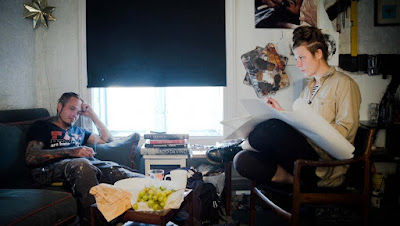 The most amazing thing about the new documentary The Painter and the Thief is the improbable friendship at the film’s core.

Director Benjamin Ree begins his story when an artist whose career seems on the rise learns that two of her paintings have been stolen from an Oslo art gallery. Such an art theft could have been the basis for a conventional thriller, but as Ree discovered, the story took the most unexpected of turns.

Artist Barbora Kysilkova, a Czech emigre to Norway, decided to meet Karl-Bertil Nordland, one of the pair of men who stole her paintings. Nordland claimed that his brain was so fried on drugs at the time of the theft that he couldn't remember what he did with the piece he took.

Felonious behavior aside, Ree’s movie has less to do with theft and possibly even with art than with the bizarre relationship that develops between Kysilkova and Nordland.

Sporting an abundance of tattoos and looking as if he’s en route to a skinhead convention, Nordland tells Kysilkova about his eight years in prison, his crummy childhood, and his drug addiction. She paints his portrait, demanding free modeling services as an act of contrition for having stolen her paintings.

About three-quarters of the way through, Nordland suffers a serious injury in an automobile accident and is sentenced to more prison time. Kysilkova helps Nordland with his rehab, and in his second stint in prison, Nordland begins to reform himself.

By this time, we've also met Kysilkova's husband, a guy who not surprisingly wonders why his wife insists on sustaining this relationship. His questions lead the couple into therapy. We also learn some telling details about Kysilkova's pre-Oslo life, which involved a terribly abusive relationship.

I can't say that I related to Kysilkova's art. One of the stolen paintings is called Swan Song; it depicts a dead swan — limp, and, of course, lifeless. Kysilkova's work puts a high-sheen gloss on morbidity. I also never quite bought the suggestion that we're watching an irresistible attraction between two damaged souls, each of them drawn to dark impulses.

If you're looking for an arc of character development, it might go something like this: By the end of the film, Nordland seems to be on an uptick while Kysilkova might be treading water.

I had a strange, fractured reaction to The Painter and the Thief. I was fascinated by the film at the same time as it left me with a sense of dissatisfaction, a suspicion that despite the movie’s intimacy, the story might have benefited from a bit more perspective.

Ree’s film pulls us into the lives of characters who live in ways that never totally compute. As far as Kysilkova is concerned, it's not clear how much she understands about herself or even wants to.

Whether this is the stance of a person who’s unwilling to explore her motivations or the insistence of an artist who doesn’t wish to get in the way of her aesthetic impulses is anyone’s guess, and you'll have to decide for yourself.

Email ThisBlogThis!Share to TwitterShare to FacebookShare to Pinterest
Labels: Barbora Kysilkova, Benjamin Red, Karl-Bertil Nordland, The Painter and the Thief