An experiment -- and its problems 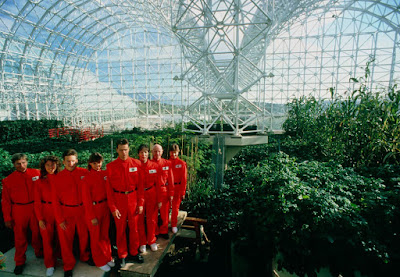 What if you could enter a spacious, self-sustaining environment, say one with 3.4 acres of floor space? You’d be able to see the outside world, but your immediate environment would include a variety of climates — from rain forests to oceans to a wetland. Your new habitat would generate its own air supply and water. You’d grow and harvest your own food.

Sound appealing at this moment when the world beyond your home feels especially dangerous thanks to Covid19?

After seeing the documentary Spaceship Earth, such sequestered living may lose much of its appeal.

Director Matt Wolf’s documentary tells the story of Biosphere 2, a well-intended experiment that was conducted in the early 1990s in hopes that it would serve as a preview of coming of attractions for colonizing distant planets.
That’s interesting enough, but the movie isn't only about a large-scale experiment; it’s also about the spirit and commitment of a group of people who decided to spend their lives thinking outside whatever boxes they could find.

Wolf introduces us to the team of men and women who initiated many other projects before winding up in the aptly named town of Oracle, Arizona, home of Biosphere 2. Led by John Allen, a kind of modern Renaissance man, this group of adventurers built a ship and sailed it around the world. The people who undertook these projects looked much like other communal adventurers of the 1960s — except for one thing.

As one participant put it: We weren’t a commune. We were a corporation.

The group tried to generate profits from its efforts, which included a traveling theater company and establishment of an art gallery in London.
With Allen at the helm (more or less), the group became innovative capitalists with a consciousness that turned them into early actors when it came to climate change.

By the time, Allen and committed to the Biosphere project, major money was needed, something on the order of $150 million: Ed Bass, a Texas billionaire with a taste for visionary projects, became the project's financier.

But scaling up brought other problems, a need for publicity and the arrival of throngs of tourists, as well as the curse of marketing.
Mistakes were made, one of which included a severe drop in oxygen levels inside Biosphere 2.

But even as things soured (Allen eventually lost control fo the project), some of the group's idealistic spirit remained, particularly among the eight so-called Biosphereans who lived apart from the world for two years.

Biosphere 2 eventually became the property of the University of Arizona.

Oh, and by the way, unless you already know, you won’t believe who shows up at the end when the project needs rescuing — one of the last people I’d expect to have seen in a film such as Spaceship Earth.