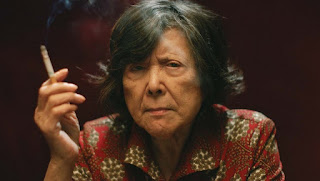 Tsai Chin, an actress who has appeared in The Joy Luck Club and Casino Royale, occupies center stage in Lucky Grandma, a whacky look at a grandmother who lives in New York City's Chinatown and who improbably finds herself in the middle of a battle between warring gangs. Plot aside, the movie belongs to 86-year-old Chin whose portrayal of a chainsmoking grandma is not to be missed. At one point, Chin's Grandma Wong contracts with a gang for protection services, a maneuver that brings her into contact with Big Pong (Corey Ha), a hulking giant who doesn't intimidate grandma in the least. The story is driven by grandma's economic plight. Her late husband left her penniless after 40 years of toil and marriage. That means Grandma Wong isn't averse to the larcenous move that drives the story into heist-pic territory. Director Sasie Sealy, who co-wrote the screenplay with Angela Cheng, adds a fair measure of humor but introduces some late picture violence that I could have done without. In fairness, though, the gangsters in Lucky Grandma mostly come off as caricatures, dolts who can't be taken all that seriously. As the movie tells its story, Chin makes it clear that Grandma Wong has a canny knack for survival. She's a memorably caustic character but one with plenty of heart -- at least when it comes to her grandson. Make no mistake, though, Grandma Wong is nobody's fool. 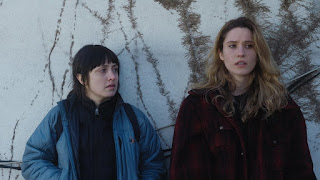 Mara (Tallie Medel) is stable and reliable. Although she hasn't entirely gotten her life on track, she's not in a constant state of upheaval. The same can't be said for Mara's friend Jo (Norma Kuhling). Bright but easily unhinged, Jo makes a habit of losing jobs and boyfriends, and when she founders, she turns to Mara for support. In Fourteen, director Dan Sallitt traces 10 years of friendship between these two young women, often leaping forward in time without fanfare or warning. In many ways, Fourteen is an extended snapshot of life in New York City for bright young women whose bond sometimes frays but who remain connected. Mara, who has her own relationships, follows Jo's march through a variety of men, scenes made poignant because we know that Jo's relationships with men aren't built to last. Focusing mostly on Mara's point of view, Sallitt chronicles Jo's deterioration as the truth about her becomes disturbingly clear: She's not simply a free spirit, she's mentally ill and can't get a grip on the demons that have haunted her since she was a teenager. Sallitt works in a deliberate style and he's not afraid to hang onto an image long enough to make us wander around in it, looking for one of the characters to emerge at a railway station in Katona, New York, for example. I can't say that Fourteen is entirely free of false notes, but this quietly affecting and carefully observed movie takes us off the usual hyperbolic movie track, bringing us down to earth with two characters whose lives might have gone unnoticed had Sallitt put his attention elsewhere.