She’s an assistant with big ambitions

The High Note may not top the charts, but it’s easy to take. 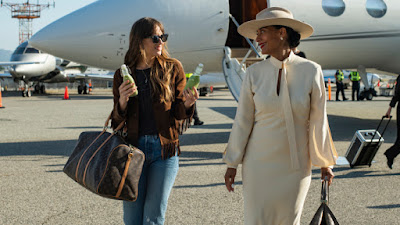 The High Note stands as one of those mediocre movies that prove watchable enough to make it worth a look. As cliche-ridden as it is glitzy, The High Note sneaks by with an attractive cast that keeps the movie moving toward its inevitable feel-good finale. Dakota Johnson plays Maggie, a young woman who works as an assistant to an R&B star Grace Davis (Tracee Ellis Ross), a woman whose once-soaring career has hit its downside. Maggie may only be an assistant but she encourages Grace to break the mold that has made her successful and stake out new turf. Maggie's plan doesn't sit well with Jake (Ice Cube), Grace's long-time manager. He wants to stick with a greatest hits approach and book her into a long-running gig at a Las Vegas hotel. Meanwhile, Maggie hopes to start a career as a record producer. Lo, she meets a talented young singer (Kelvin Harrison Jr.) at a grocery store. Her belief in the young man's talent (and her natural feel for R&B) is supposed to be enough to launch a major career for Harrison's character. Johnson mixes naivete with charm in playing a character who qualifies as an R&B nerd. Maggie learned about R&B from her DJ dad (Bill Pullman), a guy who once hosted a powerhouse radio show in Los Angeles. Ross, daughter of Diana Ross, tempers Grace's diva bitchiness with enough humanity to keep her from becoming obnoxious. Some of the plot points in Flora Greeson's script tip from improbable to downright unbelievable but director Nisha Ganatra (Late Night) gives the production (and some of its musical numbers) plenty of gloss. I haven't done star ratings on movies in years, but if I did, The High Note would qualify as a quintessential example of the two-and-a-half star breed, a palatable if lesser entertainment.
Posted by Robert Denerstein at 4:10 PM